The State Department, Department of Energy and FBI allowed the sale of 20% of U.S. uranium production and the uranium production in Kazakhstan to Russia through a tangled web. The connections are difficult to follow, as they often are in deep-state bad actions, so CDN created the Connections: Uranium One page and will update it as more information is discovered. The editorial staff would like to applaud the work of award-winning journalist Sara Carter for her dogged work that publicized the information needed to bring this travesty to the light of day.

Connections: Uranium One and Russia 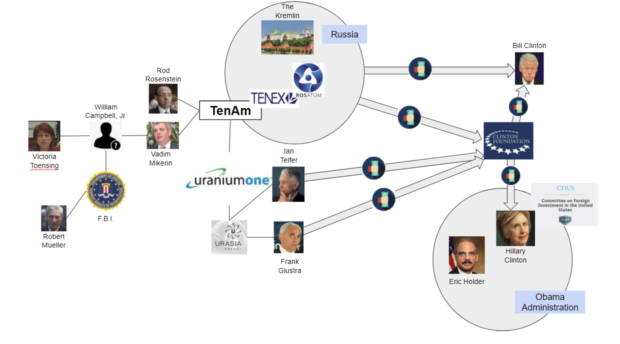 Rosatom’s Purchase of Uranium One

2005: Money from Uranium One investors began flowing into the Clinton Foundation and continued until at least 2011. Bill Clinton flies to Kazakhstan with Frank Giustra, a Canadian mining financier, aboard his private jet. Within days of their visit, Mr. Guistra’s company, UrAsia Energy Ltd., signed a deal giving it stakes in three state-run uranium mines in Kazakhstan.

2007: UrAsia Energy Ltd. merges with then-South African mining company Uranium One at which time Giustra sold his stake in the company. Uranium One immediately begins buying up U.S. uranium assets.

2010: Rosatom sought to buy a majority stake in Uranium One triggering oversight by CFIUS

2013: Rosatom bought 100% of Uranium One and delisted it from the Toronto Stock Exchange turning it into a private company.

Who was connected to the sale of Uranium One to Russia?

Rosatom: A Russian state-run Uranium enrichment company that own’s approximately 17% of the world’s uranium fuel market. Uranium is the parent company for TEXEX who then owns TenAM – it’s American-based subsidiary.

TENAM: The United States-based subsidiary of Russian state-owned energy giant Rosatom. The entity through which 20% of U.S. uranium mining was purchased by Russia. In 2011, TenAm was awarded the right to sell Uranium to U.S. nuclear plants.

UrAsia Energy Ltd.: Fledgling uranium resource company that purchased uranium assets in Kazakhstan in 2007, then merged with Uranium One.

Frank Giustra: Mining financier and owner of UrAsia Energy Ltd. Giustra donated $31.3 million to the Clinton Foundation shortly after Bill Clinton traveled with him to Kazakhstan to orchestrate his purchase of state-run uranium assets in the country.

FBI: the Federal Bureau of Investigation – ran William Campbell as a confidential informant at the time the Uranium One deal was sanctioned.

Rod Rosenstein: At the time of William Campbell, Jr’s involvement in the Rosatom – Uranium one deal, Rod Rosenstein was the U.S. Attorney for Maryland, where TenAm was based. He was involved in the investigation and prosecution of TenAm President Vadim Mikerin. Rosenstein is currently the U.S. Deputy Attorney General and appointed Robert Mueller as special counsel in the investigation into Russian interference in the 2016 election.

Robert Mueller: Then-director of the FBI that was investigating the Uranium One sale and running William Campbell as an informant. Mueller is the current special counsel investigating Russian interference in the 2016 election.

CFIUS: The Committee on Foreign Investment in the United States is “an inter-agency committee authorized to review transactions that could result in control of a U.S. business by a foreign person in order to determine the effect of such transactions on the national security of the United States.” CFIUS is composed of (emphasis added for departments mentioned on this page):

Hillary Clinton: Secretary of State before, during and after the sale of 20% of America’s uranium production to Russia. The State Department plays a significant role in CFIUS.

Ian Telfer: Prominent investor in UrAsia Energy Ltd., then chairman of Uranium One. Telfer reportedly donated $2.35 million to the Clinton Foundation through his own family’s charitable foundation while the Uranium One deal was being reviewed by CFIUS. These transactions were never reported by Clinton despite ethics rules requiring disclosure.

The Clinton Foundation: The foundation received $148 million dollars from foreign persons/companies in from 2005 to 2011. The first, prior to Uranium One’s acquisition of the Uranium assets of Kazakhstan, was orchestrated by Russia. Additional money came just before Russia, through Rosatom, acquired Uranium One and its assets in the U.S. and Kazakhstan.

William Campbell, Jr.: Confidential informant for the FBI working undercover during the investigation of the Uranium One sale and received a $51,000 check from the FBI in January 2016 in appreciation for his work.

Vadim Mikerin: Director of  the Pan American department of TENEX and president of TENAM

Victoria Toensing: Lawyer representing William Campbell before and during his testimony to Congress about the Uranium One deal. Toensing was a Reagan administration Justice Department official and a former chief counsel of the Senate Intelligence Committee.