(This column was written before the deluge of sexual assault accusations hit the Roy Moore campaign in Alabama. At the time Codevilla’s advice was spot on, now I suppose we can still hope.)

The best moment for conservatives during the Claremont Institute’s panel discussion on “The Resistance and the Violent New Left” came at the end during the question period. An appeaser popped up and asked the panel how can “we” encourage more “leaders” like Lindsey Graham, John McCain and Lisa Murkowski to run for office instead of “embarrassing” candidates like Alabama’s Roy Moore? 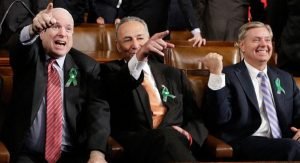 His question was met with dead silence from the panel of William Voegeli and Angelo Codevilla (of the Claremont Institute), Michael Walsh (author and media critic) and Henry Olsen (Ethics & Public Policy Center).

After a lengthy pause Codevilla leaned over toward the microphone and observed Moore “hasn’t lost yet” and we can “vote and hope,” which was the conclusion of the optimism portion of the event.

In a single anecdote the audience saw the problem confronting conservatives today. We are assailed from without by, in Codevilla’s words, “a compact ruling class,” — where establishment Republicans are full participants — along with bike–lock swinging members of Antifa functioning as storm troops. While inside the GOP accommodationists and other Quislings want to restore tranquility by electing more politicians whose first instinct is preemptive surrender.

The situation doesn’t appear to hold much possibility for improvement in the panel’s view, in spite of or possibly because of the election of Donald Trump. Codevilla’s opinion is, “The Resistance has convinced itself Trump is a passing phenomenon.” And a brief one at that. “Trump was elected to be revolutionary against the ruling class and GOP establishment, but in office he has equivocated.”

It’s his belief that what he terms the Cold Civil War will continue to heat up.

Live–and–let–live conservatives are confused by the left’s increasing rhetorical and physical violence in what appears to be a Whittaker Chambers’ moment for the right. In sports, when one side appears to completely outclass its opponent, it’s not uncommon for the victor to display good sportsmanship and ease up rather than pad the margin of victory.

Conservatives see a cultural landscape where their moral positions have been routed. And an indifferent Big Government appears impervious to influence by average voters or election results.

Naturally, many conservatives assume they’ve lost. So why all the leftist violence? Isn’t it time to put the all–conference agitators on the bench?

As Mr. Dooley, not on the panel, said, “Politics ain’t bean–bag.”

“Cultural Marxists are sensing a win and it’s a fact movements get more violent the closer they get to ultimate victory,” explains Walsh. Voegeli posits that when a faction thinks it’s only a matter of time before total victory and the assumption of power in a permanent majority, any display of inhibition is a betrayal of the cause.

Furthermore, the left’s violence and the ideology isn’t likely to be coherent. “A [movement] united by impulse is likely to be impulsive,” Voegeli wryly observes.

The bad news for accommodationist Republicans, like the questioner, is when the left wins there aren’t likely to be many prisoners taken, ideological or otherwise. Academia’s cultural Marxists are marinated in aggressive outrage and moral arrogance. “The Left is taught they’re inherently superior,” Codevilla said.  And as ideologically superior beings, those who disagree are by default intellectual sub–humans with all the tender care and feeding the sub–human label encompasses.

Adapting to the left’s views is going to be difficult if not impossible for principled conservatives, although Lindsay Graham and John McCain may offer conversion therapy.

Olsen says the left defines America as “individual freedom. Anything that stands between desire and its fulfillment is null and void.” This leftist definition of America is intensely personal and subject to abrupt change (Voegeli’s “impulse”), while for conservatives the definition is institutional and relatively fixed. Olsen and Codevilla are united in their belief the differences between left and right are “intractable.”

Consequently, there’s no room for compromise in this ideological fight to the finish. Codevilla warns there are real consequences, “The Resistance expresses the evolving framework of ruling class thought.” The absurd and aggressive ideology one can read with distaste in the HuffPost is a harbinger of the next Democrat administration’s policy. Even Hillary Clinton, according to Codevilla, planned to “crush the deplorables and buy off the pitiables” on her way to victory.

With the exception of Olsen, the panel is united in a belief the left must be confronted and defeated in the street and in the voting booth. Conservatives need leadership, like Trump, that will get in the faces of the left and, not like Trump, be consistent in their opposition.

Walsh in particular has had it, “I can’t emphasize enough what miserable sods these people are. The left is an insane cargo cult of fascists. Until baby boomers are dead you will have no justice and no peace.”