Despite Columbus Day being a federal holiday, Oregon, Austin, and many other progressive cities will instead celebrate Indigenous People’s Day.

Banks, post offices and government buildings were already to be set to close Monday in honor of the federal Columbus Day holiday, but the local and state government proclamations will change the name of the holiday on their respective calendars.

Christopher Columbus traveling to North America represented “a cycle of colonialism that still has ramifications today,” said the Klamath Tribes Youth Council in a statement.

The modern effects of colonialism were also mentioned in statements after the Austin, Texas city council voted 9-1-1 on Thursday to approve the celebration of Indigenous People’s Day. The council’s resolution said that Columbus arriving in America in 1492 was the “beginning of the colonization of indigenous people that forever changed their identity, cultures, and achievements.”

The resolution also raises up progressive agenda items as a reason for the revisionist policy.

The resolution proclaims that the City of Austin has a responsibility to “oppose the systematic racism” directed at indigenous people in the United States” and promote “closing of the equity gap” through policies and practices that “reflect the experiences” of indigenous peoples, ensuring access and opportunity, plus “honor our nation’s indigenous roots, history, and contributions.”

It states: “…honoring the role of Columbus as a historical figure promotes values of intolerance and violence that are still common in today’s world and are opposed to the values of the citizens of Austin.”

Some feel the renaming is an affront to European-American history, while others think the symbolic move doesn’t go far enough.

Ira Straus of National Review wrote that the renaming “amounts to declaring officially — or rather, implying officially, since it would not be safe for politicians to say openly what the theorists of this deconstruction say — that our American society, which Europeans built on the heels of Columbus’s voyage, is fundamentally wrong and needs to be replaced by its ‘Other.'”

“But what, then” — the lady asketh – “is it that this Columbus Day is in fact about?” It is about reminding ourselves of the fundaments of who we are and where we come from. It is about honoring a pivotal moment in our history and about remembering our history accurately — a history that traces back far beyond 1776 to 1492. And back beyond that, too.

Flagstaff, Arizona area native activist Klee Benally said he wants “justice, not gestures,” and that his effort is “about occupied stolen lands from Indigenous people.” 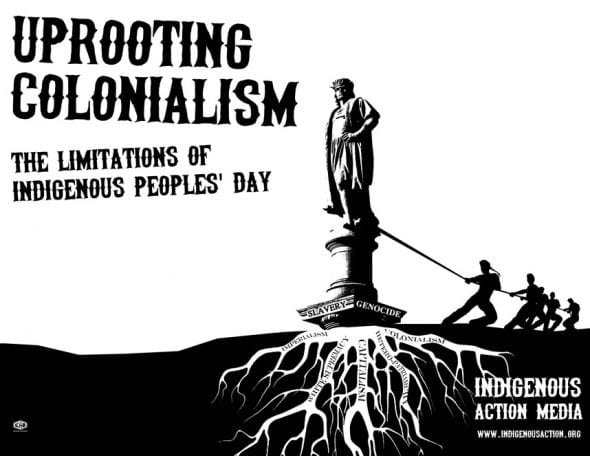 An article on Indigenous Action Media quotes a Tongva activist who also believes that changing a holiday’s name is not enough:

Charlie Sepulveda, Tongva from occupied lands of “Los Angeles” states, “Changing Columbus Day for Indigenous Peoples Day, while appropriate, is nothing more than a politics of recognition. It isn’t justice. It doesn’t give land back. It doesn’t move the Tongva toward decolonization or strengthen our ability to be sovereign.

The clash of cultures isn’t over and it looks well set to go beyond statues and holiday names.

Support Conservative Daily News with a small donation via Paypal or credit card that will go towards supporting the news and commentary you've come to appreciate.
Tags
Columbus Day Indigenous People's Day