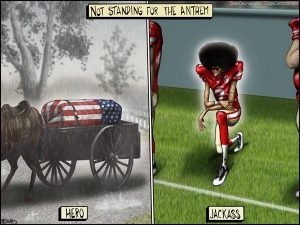 Oppression certainly isn’t what it used to be. Instead of vicious police dogs, water cannon, billy clubs, and Bull Connor, America is greeted with the sight of millionaires and billionaires kneeling in football stadiums trying to make white America feel guilty without so much as a Chihuahua yapping in the background.

And they aren’t alone. The Opposition Media, celebrity culture, leftist pastors, educators, politicians, various groin activists and Hollywood were all united in condemning the USA for the alleged subjugation of blacks. The protesters had no compunction about attacking the president and insulting the flag.

If this is “oppression” it’s news to Stalin, Hitler, Saddam and Kim Jong–Un. If I were a white supremacist, I think I’d demand my money back. From all appearances, it’s whites, conservatives of all colors and taxpayers who are being told to sit down and shut up.

The left claims to own science, so lets look at the data. First of all the Us is one of the least racist nations on the planet. An investing and investment newsletter, with the credibility–dissolving name of Insider Monkey, performed an analysis of racism polls that included “responses of over 85,000 people from 61 countries” and found the USA didn’t even make the top 25 of the most racist countries.

The number one for racism was India with South Korea at number 25. What researchers did find was the US ranked #12 on a list of the Least Racist Countries in the World. The report concluded, “We believe America, on average, is one of the most racially tolerant countries on Earth.”

So much for “oppression.” But no protest implying malevolence on the part of whites would be complete without including “police brutality.” Data here proves there may be individually brutal cops of all colors, but there is no institutionally brutal police regime threatening blacks or anyone else.

Philippe Lemoine did an analysis of the Police ­Public Contact Survey (PPCS). It’s a 70,000 sample of US residents 16 or older that’s representative of the whole population. Participants are asked if they had an encounter with the police during the past year. If so they are asked for details, including any use of force.

This means data from the survey is based on personal encounters with law enforcement and not speculation on encounters other people have had with cops based on OpMedia reports or “community rumors.”

Lemoine found “just 16 unarmed black men, out of a population of more than 20 million, were killed by the police…These figures are likely close to the number of black men struck by lightning in a given year. The comparison illustrates that these killings are incredibly rare, and that it’s completely misleading to talk about an ‘epidemic.’ You don’t hear people talk about an epidemic of lightning strikes and claim they are afraid to go outside because of it.”

The case for routine police harassment is just as fraudulent. Black men have less yearly contact with police than whites: 17.5 to 20.7 percent. And as for injury, protesters in the stadium have a greater chance of getting a rug burn at the hands of Monsanto than they do a bruise at the hands of the cops.

“Actual injuries by the police are so rare that one cannot estimate them very precisely even in a survey as big as the PPCS, but the available data suggest that only 0.08 percent of black men are injured by the police each year, approximately the same rate as for white men.” Lemoine reports. It would make more sense to accuse the National Highway Traffic Safety Administration of brutality since black men are 44 times more likely to be injured in a car crash.

Lemoine’s conclusion: “The media’s acceptance of the false narrative poisons the relations between law enforcement and black communities throughout the country and results in violent protests that destroy property and sometimes even claim lives.”

So why are the knee people blaming ticket holders and the audience? There aren’t any billionaires, mayors or Members of Congress in the stands. All the people with real power are on the field insulting the blameless over a grievance that doesn’t exist.

During the Civil War black soldiers in the 54th Massachusetts Volunteer Infantry — immortalized in the movie “Glory” — could distinguish between individual bigots and the flag of the nation that was fighting to free the slaves.

I wonder why privileged football players, and their enablers in politics and the media, can’t do the sam