The Department of Justice announced Wednesday that they have settled two lawsuits by Tea Party groups who were targeted by the IRS under former President Barack Obama.

The IRS substantially delayed applications for tax-exempt status when they included “patriot”, “tea party”, “9/12″ or descriptions that aligned with Tea Party ideals.

“As a result of these criteria, the IRS transferred hundreds of applications to a specifically designated group of IRS agents for additional levels of review, questioning and delay,” Attorney General Jeff Sessions said in a statement.  “In many instances, the IRS then requested highly sensitive information from applicants, such as donor information, that was not needed to make a determination of tax-exempt status.”

Sessions spoke Wednesday at a Heritage Foundation Legal Strategy Forum where he said that it should “be without question that our First Amendment prohibits the federal government from treating taxpayers differently based solely on their viewpoint or ideology.”

“These cases against the IRS shouldn’t have happened in the first place.  They never would have been necessary if government had acted properly,” he added.

Lois Lerner took the fifth during May 2014 Congressional testimony about the targeting and IRS Commissioner Doug Shulman testified that there was “absolutely no targeting” by the IRS. 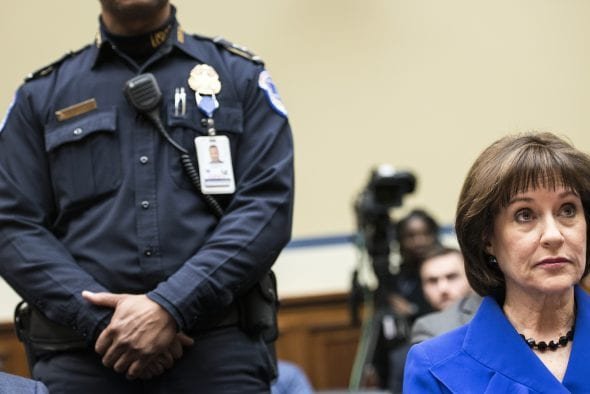 Both Lerner and Shulman are no longer with the agency but have faced no criminal charges. President Obama announced that there was “not a smidgen of corruption” at the IRS.

Sessions left no question that the Justice Department believes the IRS wronged the Conservative groups.

“There is no excuse for this conduct,” he said. “Hundreds of organizations were affected by these actions, and they deserve an apology from the IRS.  We hope that today’s settlement makes clear that this abuse of power will not be tolerated.”

Support Conservative Daily News with a small donation via Paypal or credit card that will go towards supporting the news and commentary you've come to appreciate.
Tags
Jeff Sessions Lois Lerner Politics The Department of Justice the IRS Trump Administration