California Governor Jerry Brown signed the “California Values Act” into law Thursday giving California the made-up status of “Sanctuary State” forcing ICE to inform the progressive paradise that the law will make things much worse for illegal aliens in the state.

“Governor Jerry Brown’s decision to sign SB54 and make California a sanctuary state for illegal aliens – including those who have committed crimes – will undermine public safety and hinder ICE from performing its federally mandated mission,” ICE Acting Director Tom Homan said in a strongly worded statement. “ICE will have no choice but to conduct at-large arrests in local neighborhoods and at worksites, which will inevitably result in additional collateral arrests, instead of focusing on arrests at jails and prisons where transfers are safer for ICE officers and the community. ICE will also likely have to detain individuals arrested in California in detention facilities outside of the state, far from any family they may have in California.”

Homan called the legislation misguided and told Governor Jerry Brown that he “is simply wrong” for telling residents that the new law will make them safer.

“Ultimately, SB54 helps shield removable aliens from immigration enforcement and creates another magnet for more illegal immigration, all at the expense of the safety and security of the very people it purports to protect,” Homan said.

The at-large arrests mean that instead of picking up a single detainee from a jail or prison, ICE agents will now have to catch them in public, at home or at work and whomever they are with could also end up being investigated for immigration crimes – including the employer. 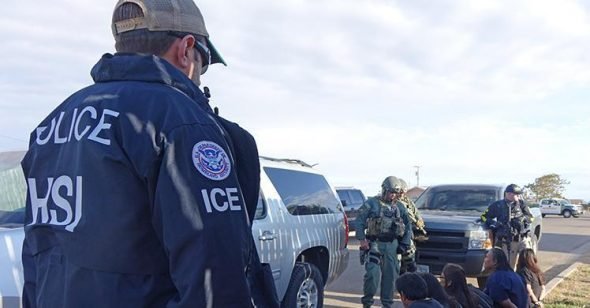 Housing detainees out-of-state will make it harder for family members and friends to visit them and put increased pressure on other states’ penal systems.

The decision to limit information sharing and cooperation goes two-ways as ICE will likely conduct raids and pull illegal immigrants out of the Golden State without their cooperation or knowledge. It won’t take more than one or two high-profile raids before illegal aliens either self-deport back to their home countries, give Canada a shot, or move to a non-sanctuary state.

Support Conservative Daily News with a small donation via Paypal or credit card that will go towards supporting the news and commentary you've come to appreciate.
Tags
Jerry Brown The California Values Act U.S. Immigration and Customs Enforcement