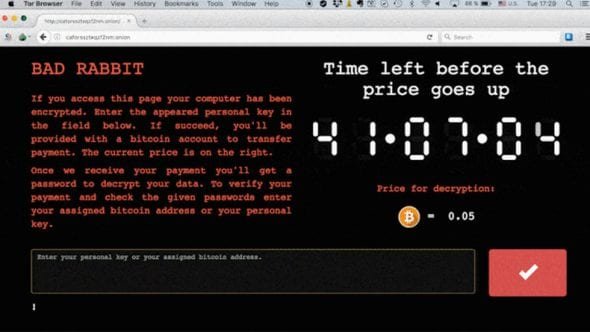 Bad Rabbit poses as a phony Adobe Flash Player installer to infect the computer. It then encrypts the contents of the infected computer making the data and programs useless and demands the owner pay a ransom in Bitcoin – an untraceable cyber currency.

The United States Computer Emergency Readiness Team (US-CERT) said that it had “received multiple reports of ransomware infections, known as Bad Rabbit, in many countries around the world,” in a statement.

CERT said that Bad Rabbit is a suspected variation of Petya, believed to originate from Russia and that paying the ransom is “discouraged” because doing so “does not guarantee that access will be restored.”

Most modern antivirus software programs, including Windows Defender, should be able to detect and prevent Bad Rabbit from infecting computers as long as the software is up-to-date.

The malware creators are apparently fans of HBO’s “Game of Thrones” as three functions in the ransomware are named Drogon, Rhaegal and Viserion after Daenerys Targaryen’s three dragons. A portion of the installation program is named Gray Worm after her military commander.

To protect computers, users should make sure that all antivirus software is updated and avoid using any Flash Installers on websites other than Adobe’s.