The federal government is currently enmeshed in two gigantic, expensive reform projects, one domestic and one foreign. Both are failures even though the tactics couldn’t be more different. In one — at a cost of $2.5 trillion — Uncle Sam is trying manfully to completely change a political culture.

In the other — at just under $1 trillion — Uncle Sugar won’t touch the culture. What is the same, and the ultimate source of failure, is the obstinate refusal of project architects to recognize their strategy isn’t working now and won’t be working in the future. 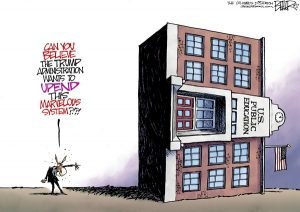 We’ll begin with the relatively cheap failure. Since 1980 the Dept. of Education has spent $872,519,440,000 on just primary and secondary education. The scores from the latest nationwide ACT college admission test are so bad that to forestall criticism of the entire effort, the focus has been shifted to the old perennial: The Achievement Gap.

The Washington Post reports, “Scores…show that just 9 percent of students in the class of 2017 who came from low–income families, whose parents did not go to college, and who identify as [minority] are strongly ready for college. But the readiness rate for students with none of those demographic characteristics was six times as high [at] 54 percent.”

Students with one of the three “handicaps” scored 26 percent college ready, while those with two of three came in at 15 percent.

It would be easy to look at the “six times” more successful and assume all was well in education, but don’t. These numbers indicate a failure so large Mitch McConnell could have been supervising the project.

There were 3.3 million high school graduates in the spring of 2017. Two million took the ACT test and of those 1,080,000 achieved scores indicating they are ready for college. The other 920,000 didn’t make the cut. When you add that number to the 1,333,000 graduates that already knew taking the test was a waste of time, the total of unprepared graduates was 2,253,000. So the feds spent $535 billion on these kids (not counting additional billions spent by state and local governments) during the 12 years they were in school and after that stupendous expenditure ($161,000.00 PER STUDENT!) only 32 percent were ready for college.

With those results, its only natural the focus would be on the “achievement gap” between minorities and the other categories. In the understatement of the year ACT chief executive Marten Roorda said, “You could argue that those investments should have made a clearer difference and that’s not what we’re seeing.”

This is where the really expensive culture–changing project becomes relevant. In Afghanistan, the US is trying to install a modern democratic state in a land with a primitive, medieval, tribal culture whose only bow to modernity is a thin veneer of alternating current.

Yet there are similarities. US minority culture and Afghan culture feature strong tribal or gang–based loyalties. Both have impulsive honor/vengeance pathologies. And both feature poor education and a high illiteracy rate. Islamic fundamentalism is unique to Afghanistan as out–of–wedlock births are limited to the US example.

Afghanistan has been corrupt for centuries and has absolutely no history of impartial representative government. Yet within living memory in the US the family culture, which is the root of education problems, was an asset to learning.

In 1950 the rate of out–of–wedlock births for black women was approximately 18 percent. Today the percentage is 72 percent. Ignoring this has real costs for the children. Spending billions at one end of the education cycle while ignoring the origin of the problem does nothing more than provide permanent, well–paid jobs for bureaucrats.

The feds should have no role in education in the first place. That’s a state and local responsibility. But if the money is going to be spent, spend it wisely. Try to change the dysfunctional culture of out–of–wedlock births and resulting poverty. Political culture change is destined for failure in Afghanistan. But there is a chance to revive the marriage culture here and, in turn, close the “achievement gap.”

Let’s try the Afghanistan strategy. Attack a dysfunctional culture directly. Emphasize marriage and finishing school before becoming a mother. After 17 years in Afghanistan, we’ve made no difference. Here 17 years of culture emphasis could make a big difference.