Duck Dynasty’s Phil Robertson and former White House advisor Steve Bannon have both endorsed Moore for U.S. Senate and will address Roy’s supporters during the rally that begins at 7:00 pm CDT in Fairhope, Alabama.

President Donald Trump is backing Moore’s adversary, Sen. Luther Strange, likely because Strange offered his vote on the Graham-Cassidy Healthcare Bill which is now on its deathbed. But, the president did say that he would back Moore should he win the primary run-off.

The Trump-Bannon head-to-head endorsements have many implications for the 2018 mid-term elections. The Republican establishment fears that a Moore win would ignite an anti-establishment, anti-incumbent wildfire leading to a slew of primary challenges against GOP candidates. If Moore wins, it would also call into question Trump’s ability to rally support for establishment candidates.

Trump held a “Make America Great Again Rally” in Huntsville, Alabama for Luther Strange on Saturday night. Polls taken after that event show Strange’s support slipping. A September 24 Trafalgar Group poll shows Moore up 16 points over Strange up from 8-10 points before the rally.

Moore is widely seen as a more Trump-like candidate while Strange represents the status quo in Washington to many Alabamian voters. We’ll see if Bannon and Robertson help Moore keep his momentum as voters go to the polls on Tuesday. 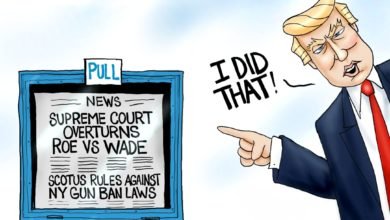