Irma, already a category four hurricane, is likely to strike several eastern Caribbean islands in the next 18 to 36 hours and continue on a track very likely to impact Florida this weekend as a major Hurricane.

Note: this is an older post, please look for more information by Following our latest Irma coverage HERE. 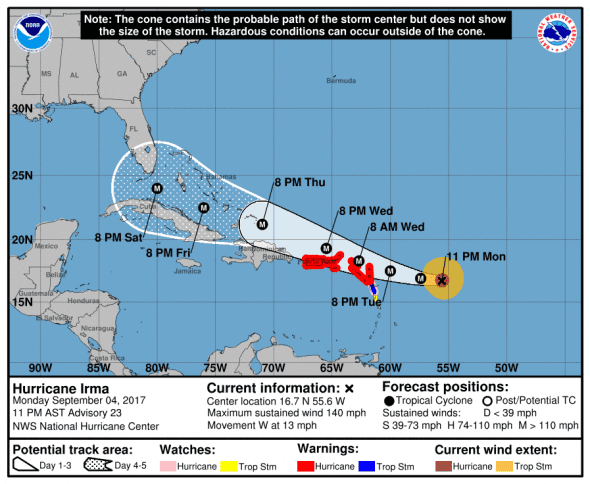 The barometric pressure inside the storm is 943 mb and the satellite presentation of Irma shows a more distinct eye wall than the last several hours.

Irma is a category four storm and is expected to continue strengthening to 150 mph, just 7 mph under category 5, over the next 24 hours.

5-day weather models put Irma just South of Florida on Saturday. The models separate slightly after that, but consensus shows an increasing chance that Irma will directly impact Florida. A lot of new information was input into the models for the 0000 UTC (2000 AST) run which helped understand how two external weather systems may steer Irma in the coming days. The chance that Florida takes a direct south-to-north hit by a major hurricane is increasing by the hour.

A lot of new information was input into the models for the 0000 UTC (2000 AST) run which helped understand how two external weather systems may steer Irma in the coming days. The chance that Florida takes a direct south-to-north hit by a major hurricane is increasing by the hour. 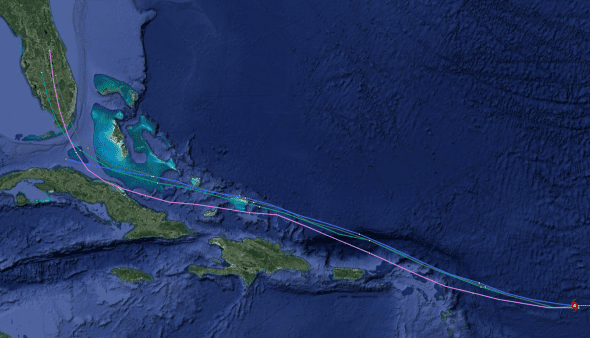 If the storm takes the current model’s predicted course, straight up the middle of the Florida peninsula, damage could be catastrophic for the state. The storm could devastate communities from the Keys to Jacksonville in a matter of just over 24 hours. Floridians should start preparing now to either shelter in-place or evacuate. Don’t wait until the last minute and please listen to local authorities for instructions.

The government of Antigua has issued a Hurricane Warning for the islands of Antigua, Barbuda, Anguilla, Montserrat, St. Kitts, and Nevis. A Hurricane Watch has been issued for the British Virgin Islands.

The government of the Netherlands has issued a Hurricane Warning for the islands of Saba, St. Eustatius, and Sint Maarten.

The government of France has issued a Hurricane Warning for St. Martin, Guadeloupe, and Saint Barthelemy.

A Hurricane Watch has been issued for the U.S. Virgin Islands, Puerto Rico, Vieques, and Culebra.

The government of Barbados has issued a Tropical Storm Watch for Dominica.

STORM SURGE: The combination of a dangerous storm surge and large breaking waves will raise water levels by as much as 6 to 9 feet above normal tide levels along the coasts of the extreme northern Leeward Islands within the hurricane warning area near and to the north of the center of Irma. Near the coast, the surge will be accompanied by large and destructive waves.

The combination of a dangerous storm surge and the tide will cause normally dry areas near the coast to be flooded by rising waters moving inland from the shoreline. The water is expected to reach the following heights above ground if the peak surge occurs at the time of high tide…

SURF: Swells generated by Irma will affect the northern Leeward Islands during the next several days. These swells are likely to cause life-threatening surf and rip current conditions

When to Expect Hurricane Irma