Hillary Clinton has finally admitted what has been clear ever since the bogus narrative that the Russians worked with the Trump campaign to steal the election from her.

She plans to steal it herself with a great big assist from Deep State fixer Robert Mueller.

In a stunning interview with National Public Radio, Mrs. Clinton has for the first time indicated that she is looking to challenge the results of the 2016 vote under the bogus pretense of Putin’s interference that is ALL based on flimsy evidence and speculation.

JUST IN: Clinton refuses to rule out challenging the legitimacy of 2016 election https://t.co/PAjUW1oGIP pic.twitter.com/FDCtuKXQvO

According to The Hill “Clinton won’t rule out questioning legitimacy of election”:

Hillary Clinton said she wouldn’t rule out challenging the legitimacy of the 2016 presidential election if Russian interference turned out to be deeper than previously thought.

“No, I wouldn’t rule it out,” she said in an interview with NPR published Monday.

The defeated Democratic nominee stressed, however, that she does not believe there is a means to officially challenge the election’s outcome.

“I don’t know if there’s any legal, constitutional way to do that,” Clinton said. “I think you can raise questions.”

Clinton has repeatedly blamed Russia’s efforts to intervene in last year’s election for her loss to Donald Trump, but her latest comments reflect the depth of her frustration with the Kremlin’s efforts.

They come as special counsel Robert Mueller is investigating the election-meddling campaign that U.S intelligence agencies say was done to benefit Trump, and whether any of the president’s associates colluded with Moscow.

“[Trump] knew they were trying to do whatever they could to discredit me with emails, so there’s obviously a trail there,” Clinton said. “I don’t know that in our system we have any means of doing that, but I just wanted to add to the point you made. There’s no doubt they influenced the election: We now know more about how they did that.” 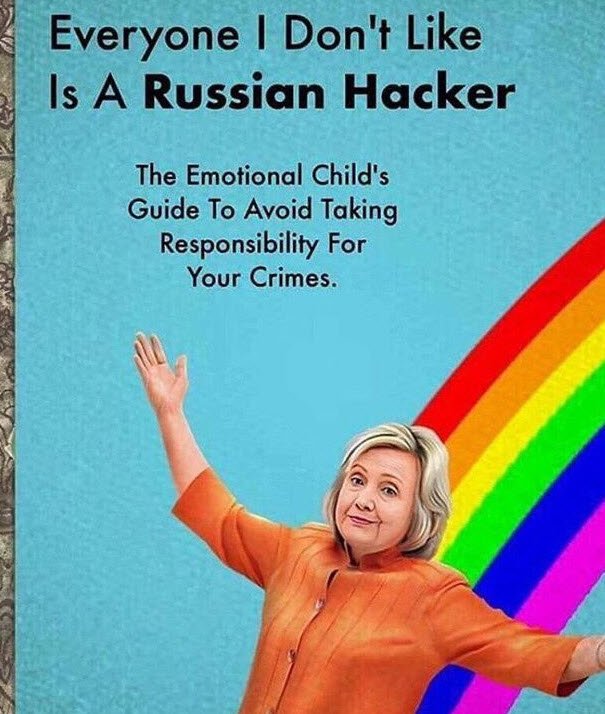 Everything makes sense now. All of the propaganda about the Russians, Comey’s gross dereliction of duty in not demanding that the FBI examine the DNC server, the boots on the ground of the so-called Resistance, California Democrats in Congress’s hammering the RUSSIA! RUSSIA! RUSSIA! narrative every day. Mueller’s appointment and most of all, her refusal to just go away.

All of the propaganda about the Russians, Comey’s gross dereliction of duty in not demanding that the FBI examine the DNC server, the boots on the ground of the so-called Resistance, California Democrats in Congress’s hammering the RUSSIA! RUSSIA! RUSSIA! narrative every day and of course, the leaks to big media. There is also Mueller’s appointment and most of all, her refusal to just go away.

Like pieces of a puzzle, the endgame is now beginning to snap into place and it could tear the country apart – but that is what she’s been trying to do since last November isn’t it?

Her and Obama’s fingerprints are on EVERYTHING that has taken place to reverse the results.