There has been a lot going around social media this last week about the sighting of an extremely rare white giraffe in Africa, reportedly the first time that one was ever captured on video.

I could have sworn that I also saw a white giraffe on Tucker Carlson’s show the other night when he hosted a freakish looking dude whose neck reminded me of one of the majestic creatures and who is an advocate for the violent tactics of ANTIFA.

Professor Michael Isaacson who teaches at the John Jay College of Criminal Justice in New York City got some publicity this week after he was quoted in an article in The Hill that “Antifa activists say violence is necessary” which landed him on Carlson’s program.

Tucker was masterful as usual in exposing this absurd geek but the publicity proved problematic for Mr. Isaacson who was discovered to have made some rather disturbing comments on social media joking about dead cops. 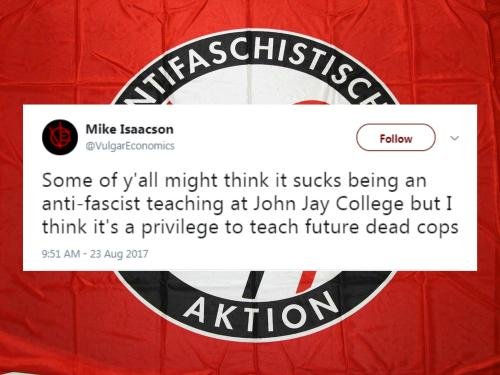 His activism and blatant disregard for the safety of the police didn’t sit well with the president of John Jay College who quickly suspended Isaacson’s ass.

The president of John Jay College said she was "shocked" to read the "abhorrent" anti-cop statement https://t.co/lqIZZjOUIS

Via the New York Post “Professor who tweeted about ‘dead cops’ suspended”:

The president of John Jay College said she was “shocked” to hear the “abhorrent” anti-cop statement spewed by a professor at her school and immediately suspended him.

“I am appalled that anyone associated with John Jay, with our proud history of supporting law enforcement authorities, would suggest that violence against police is ever acceptable,” John Jay president Karol Mason said about professor Michael Isaacson.

“Out of concern for the safety of our students, faculty and staff, we are immediately placing the adjunct on administrative leave as we continue to review this matter.”

Isaacson, who works in the economics department at the college, tweeted the anti-cop screed from the account @VulgarEconomics.

In a sign of just how badly that the soon to be former John Jay College egghead screwed up EVEN New York Mayor Bill de Blasio felt the need to denounce him!

New York City won't stand for the vile anti-police rhetoric of Michael Isaacson and neither should John Jay College.

When you’ve even lost Hizzonor you know that this guy is over the line. Way over!

Isaacson will now have more time on his hands to put on a mask and join his fellow thugs in the streets.

With any luck, he may even be able to score a gig as a regular guest on CNN, MSNBC or some other cable network that serves as apologists for domestic terrorism or even as a Democratic congressional staffer since none of them seem to be interested in speaking out against ANTIFA.