The left has begun a ferocious war against inanimate objects – perhaps the only opponent they can actually defeat. The war on statues is growing and likely to get far out-of-hand.

The alt-left: Antifa, Black Lives Matter and a mix of other groups have joined together to face off against their one true enemy – statues that in any way relate to the civil war.

From New Orleans to North Carolina and Virginia, the left is forcing local governments – or in some cases, illegally removing them on their own – to remove monuments that serve as a reminder of a dark time in American history. They believe that removing the statues will erase the bloodshed, horrific acts of war and other atrocities and misdeeds committed in the brother-on-brother conflict fought over slavery and the rights of states to govern themselves. They believe that it will erase that period in American history when men believed that other men could be property.

This is their cause of the moment, their raison d’etre, their identity – their war on statues.

They will win. They will get those monuments removed. They will have their symbolic victory over a history that will still remain. To what end?

There may be no end.

Once they run out of civil war monuments to tear down, behead, topple or otherwise cart off to be forgotten in warehouses, the left will need new enemies to keep their basement-dwelling soldiers’ hunger for blood satisfied. Next up: monuments to the founding fathers.

Many of the founders signify everything the angry left is fighting against. They were white, male, many owned land and had slaves. They were alive in a time where none of that was an affront to society. Only through the backward looking lens of history viewed from the podium of social justice self-righteousnous could anyone make those men the focus of their inner hatred – and they will.

Then what next? Ronald Reagan? The Vietnam Memorial? All the pictures of Bush’s ground zero speech after 9/11? How much history will they need to remove to create an America worthy of their efforts?

Their internalized vision of a utopian society where everything is fair, no one is mistreated, and nothing bad happens will never materialize. But they will keep erasing every non-good thing they can until it does.

The war on statues will escalate into a full-fledged war on history, capitalism and finally – the American way. That was the goal from the beginning.

Ignorant of a history they seek to erase and naive to the consequences of their actions, the left will continue to fight for communism – one statue at a time.

At protests and riots where Antifa and Black Lives Matter show up in force, there is another group that finds its way in front of news cameras to get their message out: The Workers World Party. 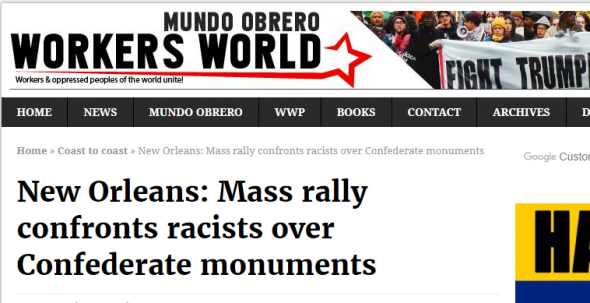 Founded in 1959, WWP is a communist political party that split from the Socialist Workers Party.

WWP describes itself as a party that has, since its founding, “supported the struggles of all oppressed peoples”. It has recognized the right of nations to self-determination, including the nationally oppressed peoples inside the United States. It supports affirmative action as necessary in the fight for equality. WWP opposes all forms of racism and religious bigotry.

Antifa, or anti-facists, is a soulless, decentralized nom-de-guerre that represents the left’s fight against anything they determine is fascistic – which is anything they don’t like. There is no national Antifa office, group, or leader. They are pseudo-anarchists accidentally fighting for the goals of American communist groups. The irony is rich.

These are the useful idiots of which Lenin spoke. Again with the irony…

Ignorant of a history they seek to erase and naive to the consequences of their actions, the left will continue to fight for communism – one statue at a time.

At some point, the media’s glorification of the airbrushing of history will foment a response from those who choose the American way of life. They may make similarly idiotic decisions and decide that monuments and artifacts that they disagree with should also be removed, destroyed or otherwise altered.

What happens when statues of liberal legends, accomplishments, and events are torn from their foundations because this group or that finds them disagreeable?

They would be wrong. All of American history is to be treasured, studied and understood as it makes Americans who they are. Every great moment and each dark hour are part of the American culture. Monuments to the good and bad should all be left to stand as reminders to those living of how their way of life was shaped by them.

The war on statues is escalating and must be stopped before it is too late.

Support Conservative Daily News with a small donation via Paypal or credit card that will go towards supporting the news and commentary you've come to appreciate.
Tags
Antifa black lives matter The War on Statues The Workers World Party