“It’s a trend that does not bode well for hopes of de-escalating tensions on the [Korean] peninsula,” U.S. Secretary of State Rex Tillerson said while in the Philippines on Monday. 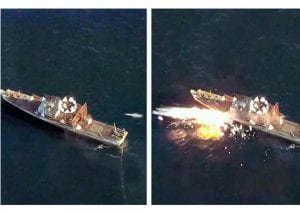 Two Stormpetrel anti-ship cruise missiles were loaded on a single Wonsan guided-missile boat at the east coast port of Toejo Dong. While this is the first time western intelligence has seen anti-ship missiles loaded on a seagoing platform since 2014, North Korea test fired an anti-ship missile from a land-based launcher in June of 2017 against a stationary sea-based target. It did hit the ship at a range of about 125 km, but it is unclear if the North Korean’s possess the guidance capability to hit moving ships.

Support Conservative Daily News with a small donation via Paypal or credit card that will go towards supporting the news and commentary you've come to appreciate.
Tags
North Korea Stormpetrel Wonsan