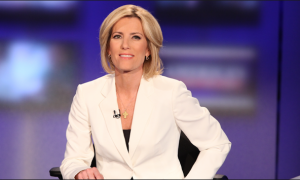 Following the suspension of one of its top hosts and a struggling prime time lineup, Fox News may be looking to make some changes in the 5-9 pm lineup – and it’s about time.

The Fox News evening shows have underperformed after Rupert Murdoch’s sons, Lachlan and James, took over operations. The two oversaw the exit of Bill O’Reilly and Megyn Kelly, an attack on Sean Hannity and now the suspension of “Fox News Specialist” host Eric Bolling.

Rumors of Fox News contributor and conservative pundit Laura Ingraham hosting a show have surfaced and if thought through could end up in a badly needed reshuffle of the FNC evening lineup.

Ingraham’s style and intellect will shine in the 9 pm slot in between Tucker and Hannity. “The Five”, Gregg Gutfeld’s snark-fest, belongs at 5 pm as a natural bridge between afternoon and evening programming and many expect it to return to its previous time.

The Murdoch kids were forced to re-think the evening lineup after Kelly and O’Reilly departed. They moved “The Five” from 5 pm to 9 pm in an odd transition between “Tucker Carlson Tonight” and “Hannity.” Bolling’s “Fox News Specialists” was added at 5 pm and made for an odd transition from afternoon news show “Your World” and deep look current events offering “Special Report.”

It appears that the Murdoch’s have felt the heat as FNC’s ratings have been in decline since the changes took place even allowing rivals CNN and MSNBC to take the top spot on several nights. Ingraham, along with some other programming changes may be their attempts to return Fox News to the undisputed #1 slot among all age groups.