The National Weather Service has upgraded Harvey to a tropical depression. Tropical storm and hurricane watches have been issued along the Mexico and Texas coastlines. 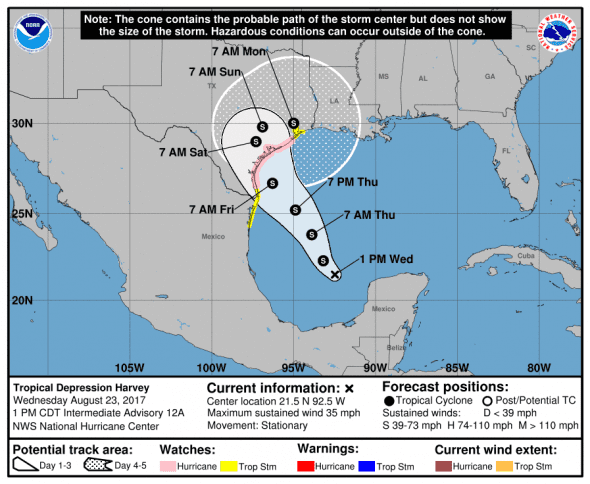 Harvey was last reported near latitude 21.6 North, longitude 92.6 West traveling at 2 mph towards the north-northwest. The depression’s winds have reached a sustained 35 mph with higher gusts and will strengthen over the next 48 hours.

Harvey is expected to reach the Texas coast late Friday as a tropical storm. The storm is expected to slow and turn northwest after landfall which will cause a massive rainfall event for southeast Texas and southwest Louisiana. Rainfall totals could exceed 15 inches in some spots.

Tropical storm force winds are expected as the storm reaches land and the possibility of hurricane force winds has not been ruled out. 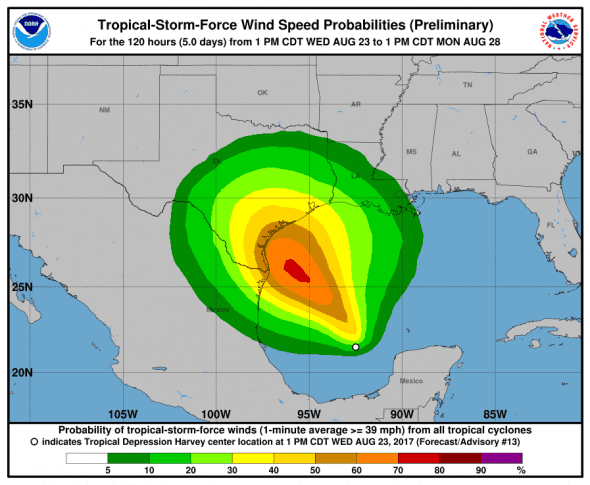 A Storm Surge Watch has been issued for the coast of Texas from Port Mansfield to High Island.

threatening inundation, from rising water moving inland from the
coastline, in the indicated locations during the next 48 hours.
For a depiction of areas at risk, please see the National Weather
Service Storm Surge Watch/Warning Graphic, available at
hurricanes.gov.

A Hurricane Watch means that hurricane conditions are possible
within the watch area. A watch is typically issued 48 hours
before the anticipated first occurrence of tropical-storm-force
winds, conditions that make outside preparations difficult or
dangerous.

A Tropical Storm Watch means that tropical storm conditions are
possible within the watch area, generally within 48 hours.

Our next update will be posted just after 6 pm ET.