Year after year after year the Democrats have been fighting against voter ID’s even though showing a photo ID when you go to vote makes all the sense in the world. I won’t go through the list of things you need a photo ID for in this country, but we need one for just about everything we do in life.

One of the big reasons the Democrats always bring up is that it is a burden on the poor and minority groups, which I could never understand because many states would offer free ID’s for the poor and even provide transportation for those who do not have their own.

Now we come to the biggest objection the Democrats have, “There is no voter fraud.” It was reported that as many as 5.7 million non-citizens may have voted in the 2008 election, which put Barack Obama in the White House. This is according to the Washington Times back in June.

The Government Accountability Institute reports that thousands of votes in the 2016 election were illegal duplicate votes from people who registered and voted in more than one state. “The probability of 45,000 illegal duplicate votes is the low end of the spectrum, and it does not even account for other types of fraud such as ineligible voting by non-citizens and felons and absentee ballot fraud”

It was just reported last week that a former elections worker in North Carolina was indicted by a Durham County grand jury for mishandling provisional ballot results during the March 2016 primary election.

It was reported a month ago that a 21-year-old Virginia man will spend between 100 and 120 days in prison after admitting that he submitted falsified voter registration forms, some of which contained the names of dead people.

There are thousands of more stories of voter fraud, yet the Democrats keep insisting that there is none, why? I have come to the conclusion that the Democrats can not win an election without it, voter fraud that is. My question to Democrats is this; what is the number of fraudulent acts that is not acceptable before it becomes a concern to them? 500, 10,000? Every time there is an illegal vote, it cancels out a legal vote and it’s not supposed to work that way. 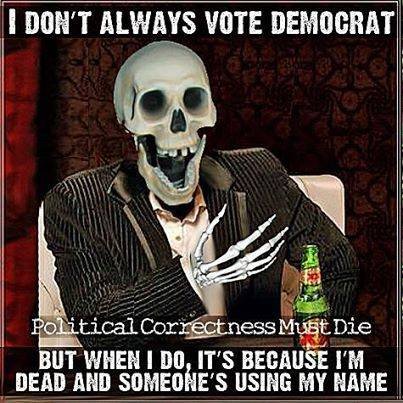