For years I have been saying we are not doing immigrants any favors by having phone prompts in other languages except for English.

One of the first things an immigrant should do when they get here is to learn the English language. After all, that is the language of America. I have always said that Congress should pass a law making English the official language of the USA.

The Center for Immigration Studies recently published a report showing that of all the immigrants entering the U.S., 41 percent register scores at or below “functional illiteracy,” which is the lowest level of English literacy also known as “below basic.”

But the lowest-percentage group to efficiently speak read and write English are Hispanic immigrants.

See, pressing 2 for Spanish is not helping the Spanish immigrant learn the language of the U.S.A.

Compared with other immigrants from around the world, those coming from Mexico and other Latin American countries are least likely to get by with the minimal language skills to acclimate to American culture. What many do not realize is that an immigrant taking the Citizenship test can request that they take the test in their native language.

The problem is that bleeding heart liberals are trying to be accommodating to the immigrants, but in reality, the immigrant is the one being hurt. This country has a big problem with immigrant groups having difficulty assimilating into the American culture, which is not only hurting the immigrant but our country as well.

If you have a Spanish community where everyone speaks Spanish, they read Spanish language newspapers, they watch Spanish language TV, listen to Spanish radio and go to stores with Spanish language signs, it’s no wonder they don’t learn English. In many states, the driving test questions are given in Spanish.

Literacy in English is not just a major problem for those entering the U.S. from over the border, as a significant proportion of Hispanics who have lived in America for a good portion of their lives are illiterate in English as well.”

The problem is that if anyone tries to bring this up or tries to make the rules tougher, they are labeled a bigot and racist.

It’s time to say who cares what they call you and start to do what’s right for America, and more people learning English is not only better for America but better for the immigrant as well.

Bring back common sense to America. 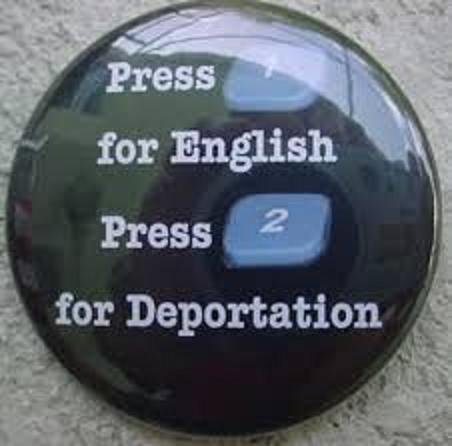 Support Conservative Daily News with a small donation via Paypal or credit card that will go towards supporting the news and commentary you've come to appreciate.
Tags
English Only Immigration