A former Clinton administration operative and longtime Democratic Party hack is tamping down expectations that the Dems will be able to regain control of the Senate next November.

The ghoulish political vampire James Carville is being a buzzkill by presenting the dopy dreamers and conspiracy theorists with a rare dose of reality regarding their electoral hopes.

Dem strategist James Carville: It would be "very, very difficult" for Dems to retake the Senate https://t.co/s0Td4WvdLF pic.twitter.com/b3iBjOjCaH

Via The Hill “Carville: It would be ‘very, very difficult’ for Dems to retake Senate in 2018”:

Democratic operative James Carville is expressing doubt that his party will take back the Senate in 2018, saying Saturday that it would be “very, very difficult,” to do so.

“I think right now most Democrats are trying to focus on the 2018 elections and trying to recruit people and keep incumbents, and you know I would say we have a pretty good chance of taking the House back. The Senate is very, very difficult,” Carville told John Catsimatidis on AM 970 in New York.

“The problem in the Senate is we have a large number of seats we have to hold in states that Donald Trump carried. Indiana, Missouri, you know places like that we have to hold seats,” he continued.

“The only places where we have an opportunity for pick up are, you know, Nevada is pretty good. After that Arizona is less good, then you’re down to Texas and Alabama, and for Democrats to win the Senate back, they have to pick up three seats,” Carville said.

Carville, however, spoke positively of the Democrats being able to retake the House despite being skunked in all four special elections this year that were promoted as referendums on President Trump.

Whatever the Dem focus groups may be saying today, it’s a long time until November 2018 and many Americans have already caught onto the Trump-Russia election meddling scam that allows the blue jackass party to avoid ever having to run on the real issues.

It’s entirely possible that the Democrats could lose even more seats in the House, especially if one of their whack job supporters like James T. Hodgkinson is able to pull off what the Bernie Sanders fan failed to do.

The negativity and violent rhetoric are a turn off to most Americans who are more interested in jobs, affordable health care, and kitchen table issues that the Democrats are blocked from hearing due to the tinfoil hats over their ears.

How much real difference do the Democrats think there will be from this electoral map: 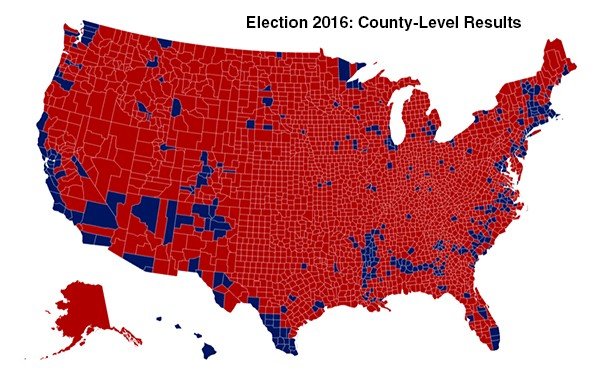 Betting it all on Russia is a sucker bet and could end up with the Dems busted back to zero.

Support Conservative Daily News with a small donation via Paypal or credit card that will go towards supporting the news and commentary you've come to appreciate.
Tags
Democrats James Carville Politics the 2018 Midterm Elections