A British publicist arranged a meeting between Russian lawyer Natalia Veselnitskaya and the son of the president Donald Trump Jr. last June. That meeting, which everyone present agrees had nothing to do with the election, has errantly become the left’s new smoking gun evidence of a Russian conspiracy – that never happened.

While ineffective and constantly incorrect news outlets like CNN and The New York Times continue to see this kind of story as evidence proving collusion between Russia and Trump, the rest of America wants to know where Natalia actually came from and how she got a meeting with Trump Jr.

The meeting, according to emails released by Donald Trump, Jr. was promised by publicist Rob Goldstone to offer damaging information on Hillary Clinton in order to have Donald meet with Natalia. When young Donald met with Goldstone’s Russian plant, she told Jr. that she had no such proof and just wanted to talk about issues on Russian child adoption.

When the meeting began, it became immediately clear that Natalia had no information on Hillary. She focused on a Russian adoption issue. Jared Kushner left at that time and Paul Manafort ignored Veselnitskaya by turning his attention to his phone.

Donald Trump, Jr. says that he took the meeting as a favor to Goldstone, an acquaintance of his father. Afterward, Donald Jr. said that it “was a waste of 20 minutes.”

It appears that Goldstone tricked Donald Jr. into meeting with a Russian – but why? Let’s start with – WHO.

Who is Natalia Veselnitskaya?

Ms. Veselnitskaya last practiced as a Russian prosecutor in 2002. Natalia was previously only publicly known for her defense of Denis Katsyv, son of a Russian railroad baron. Katsyv was accused by U.S. Attorney Preet Bharara of money laundering.

Veselnitskaya accompanied Katsyv to the United States for a deposition in the case, but when Denis was deposed, Natalia did not appear with him nor was she deposed. Afterward, the U.S. government was billed by Veselnitskaya for over $50,000 in expenses including a bill for a $1,000/night hotel room.

State Department documents show that Natalia was admitted into the United States to defend Katsyv under an immigration exemption given by Obama Attorney General Loretta Lynch. The exemption is extremely rare and was given after Veselnitskaya’s visa request was denied.

Her exemption had expired at the time of the meeting with Trump Jr so it is unclear why the Russian lawyer was allowed into the country and why she is still here.

Gateway Pundit reported that she is close to Obama and perhaps the Clintons. 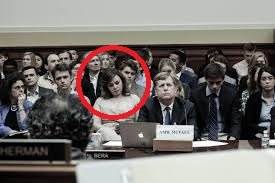 That looks like Emin Agalarov sitting next to Natalia Veselnitskaya. He was mentioned in Donald Trump Jr’s statement this morning. Emin helped set up the meeting with Veselnitskaya.

Veselnitskaya was also connected to Fusion GPS, the DNC opposition research firm that produced the fraudulent and discredited Trump Dossier.

So why was Veselnitskaya hanging out with Obama officials just days after her meeting with Donald Trump Jr.?

And why was Veselnitskaya given a privileged seat up front during the Congressional hearing?

The open questions and nefarious connections surrounding Natalia Veselnitskaya are numerous. Other than the Trump meeting and Katsyv representation, she is relatively unknown and has more connections to the DNC than the Kremlin. Why the close ties to Democrats and why doesn’t Congress care?

Donald Trump, Jr. was likely an unwitting target in Hillary Clinton’s hope to gain the White House by any means necessary. After the DNC failed that, they are using the meeting to delegitimize Trump’s presidency.

If Congress wants the full story, they would subpoena Loretta Lynch, Natalia Veselnitskaya, and Rob Goldstone. They would likely discover that Natalia was instructed by someone in the Obama shadow-state organization to approach Trump Jr. associates and offer damaging information on Hillary Clinton to them in order to get a meeting between Trump Jr. and the Russian lawyer. They could then leak the meeting to the press and Congress to substantiate the Russian collusion claims.

Notice that the plan does not require any cooperation or knowledge from the Russian government. So far, it appears that only Russian citizen who is a lawyer and Obama’s resistance group are involved.

CNN, Fox News’ Shephard Smith, and other left-leaning media have fallen for an obvious set up despite nothing illegal having actually happened. Meeting with a lawyer from Russia and discussing the adoption of Russian children goes afoul of no statutes and certainly not treason.

Democrats in Congress are thrilled to have “evidence” that Trump colluded with Russia so that their fake narrative will continue to live on.

Support Conservative Daily News with a small donation via Paypal or credit card that will go towards supporting the news and commentary you've come to appreciate.
Tags
Natalia Veselnitskaya Trump Administration