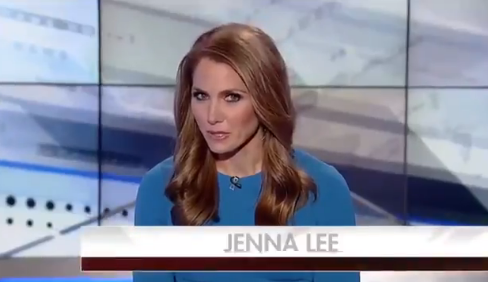 Jenna Lee, co-host of “Happening Now”, announced she was leaving Fox News on Friday after 10 years with the network. But where is the news anchor going?

She offered few hints in her goodbye as to where she might be headed, but it appears that it is journalistic in nature. “I love being a journalist,” Jenna said.  “And I have some really big ideas on how to better serve you.”

On her Twitter account, Lee recently posted a video that appears to be the first in a series she calls “Adventures of a New Mom” that her followers keep up with through the hashtag #AdventuresOfANewMom. The video is a documentary-style story of a shark-diving trip she took to South Africa and may be the first taste of her new project.

At the end of the video, she says, “I hope you come with me on my next adventure,” further hinting that Jenna’s next gig will look a lot like this story. Whether she has a contract with Travel Channel, History or National Geographic is unknown. But if the content is strong enough, top Youtubers pull in millions of dollars annually should she decide to go independent.

I doubt she’s planning a Jacque Cousteau redux, but quality travel shows do very well. We’ll just have to wait until something more formal is announced and wish her luck in her future endeavor.

Whether Jon Scott will host “Happening Now” solo or take on another co-host is also unknown and it likely won’t be clear until Monday’s airing.

Those wanting to keep up with Jenna can do so on her Twitter feed HERE.

Support Conservative Daily News with a small donation via Paypal or credit card that will go towards supporting the news and commentary you've come to appreciate.
Tags
Fox News Jenna Lee