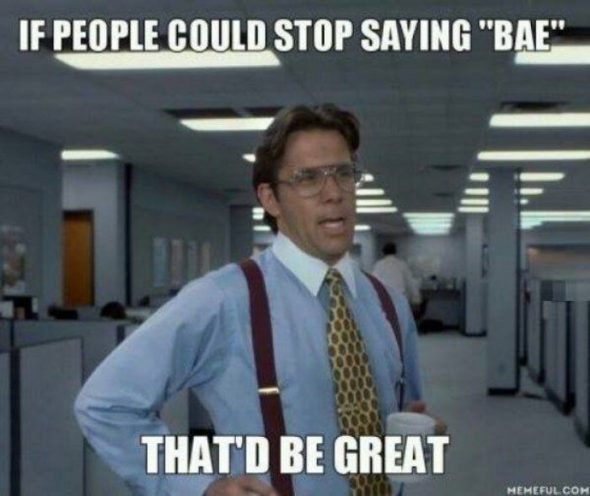 I was alerted by my editor-in-chief that not everyone knows what the heck the millennial term ‘Bae’ means – mainly because he didn’t (sorry boss.) So, I thought I’d give a shot at laying out its origins, use, and the myths surrounding the made-up word.

What does Bae mean?

The word is typically used as a noun representing a significant other – boyfriend, girlfriend, spouse, etc. But it has been used in internet memes (if you don’t know what those are, I’ll have to do another one of these articles) and social media posts to mean just about anything that’s really awesome.

Is ‘Bae’ an Acronym

Urban dictionary and a few of my not so grammatically-inclined friends have been led to believe that Bae isn’t Bae, but instead, it’s BAE. What the heck could that stand for?

According to myth, BAE means “before anyone else” or “before all else,” neither of which is correct, but they Fit – so feel free to spread the legend if it works for you.

Where did Bae come from

Visual Thesaurus’s Neil Whitman wrote that the term showed up on the web years before the acronym and all evidence points to the word being a shortened, slang version of “babe.” The term first appeared in late 2012 as “Bae caught me slippin'” meaning “my boyfriend caught me sleeping.

The first, known as “Bae caught me slippin’,” requires some explanation. Imagine that someone, let’s say Mikayla, has a boyfriend she’s on sleeping terms with. One day her “bae” finds her sleeping. Quietly picking up her camera phone, he takes a picture of the scene. Mikayla wakes up later, finds the picture in her camera phone, and posts it on Instagram, so that everyone can understand that she has a boyfriend who sometimes is present when she’s sleeping, nudge nudge.

How to use ‘bae’ correctly

Honestly, just don’t … unless feeling close to the Kardashians is important to you. The word is likely to have the lifetime of “Fo’ shizzle”, “whassup”, “chillax”, and “don’t tase me bro.”

Support Conservative Daily News with a small donation via Paypal or credit card that will go towards supporting the news and commentary you've come to appreciate.
Tags
Bae urban dictionary