Previous footage showing CNN staging moderate Muslims paying respects to those lost in the recent London terror attack showed only a small part of the effort organizers went through to stage the fake news story.

Claire Jordan, shorty speaks on YouTube and @shorty on Gab, took video of the hoax that shows posters and flowers being handed out by handlers just before the cameras roll.

The British anti-globalist activist roamed around the scene during setup and showed the Mulsim actors empty handed until professional organizers or perhaps even media staff put flowers in their hands and armed others with pre-printed posters.

Several of the people giving props to the fake protesters are wearing t-shirts with an Arabic phrase printed on it. 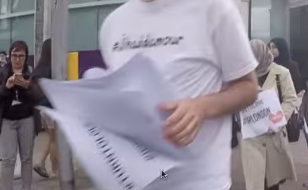 Another interesting note is that the #TURNTOLOVE #FORLONDON poster on the ground shows the wrong bridge. The terror attack started on the London Bridge while the poster shows the Tower Bridge. That’s not a mistake a Londoner would have made. Heck, I’ve only been to England once and I knew the difference.

First, the poster some of the fake protesters were carrying (note the two massive towers): 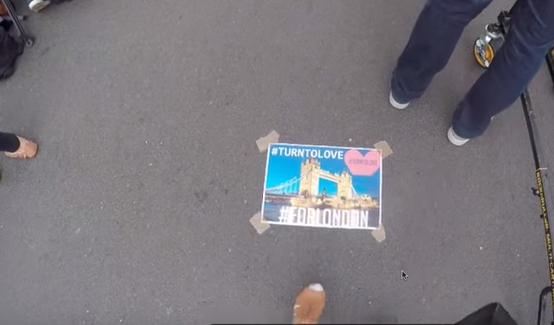 Now, here are photos of the London and Tower bridges side-by-side.

It’s obvious that some outside group, unfamiliar with London, staged the fake protest. CNN was either incredibly naive, journalistically incompetent or willfully involved. If a young lady with a camera figured it out, why couldn’t a news network?

If CNN covers any protest or march, be skeptical of the coverage. They have no problem allowing staged events to appear as real, live, news.