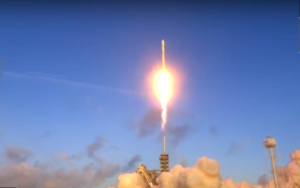 SpaceX is hoping to launch a Falcon 9 rocket on an International Space Station resupply mission Saturday evening. And for the first time, the mission will use a previously flown Dragon capsule. This recycled component mission comes just two months after SpaceX’s reuse of a previously flown first stage booster.

Dragon capsules are expected to be reused up to three times. This particular capsule last flew a resupply mission in 2014 and has a new heat shield and parachutes, but the hull, thrusters, and fuel tanks are original.

This mission, CRS-11, is scheduled to launch 5:07 PM Eastern time and is carrying station cargo and supplies for experiments. 10 minutes into the flight, the second stage will separate from the first and continue on for a June 6th rendezvous with the ISS.

The first stage booster will return to earth and land itself at Cape Canaveral as four previous Falcon 9’s have. Several more have landed at sea on a pair of autonomous recapture drone ships named “Of Course I Still Love You” and “Just Read the Instructions.”

SpaceX, owned by Tesla CEO Elon Musk, has launched a national security satellite for the U.S. government, communications and navigations satellites, and 11 prior Dragon resupply missions.

This launch is a result of a delay from Thursday’s intended launch which was scrubbed due to weather.

SpaceX is targeting launch of its eleventh Commercial Resupply Services mission (CRS-11) from Launch Complex 39A (LC-39A) at NASA’s Kennedy Space Center in Florida. The instantaneous launch window is on Thursday, June 1 at 5:55 p.m. EDT or 21:55 UTC, with a backup launch attempt on Saturday, June 3 at 5:07 p.m. EDT or 21:07 UTC. Dragon will separate from Falcon 9’s second stage about 10 minutes after liftoff and attach to the station on June 4.

The CRS-11 mission will be the 100th launch from historic LC-39A at Kennedy Space Center. Following stage separation, the first stage of Falcon 9 will attempt to land at SpaceX’s Landing Zone 1 (LZ-1) at Cape Canaveral Air Force Station, Florida.

Editor’s Note: This post was updated as the original Thursday launch was scrubbed due to weather.

Support Conservative Daily News with a small donation via Paypal or credit card that will go towards supporting the news and commentary you've come to appreciate.
Tags
Dragon resupply vehicle SpaceX