It’s ironic Elon Musk, one of America’s premier subsidy farmers, is also a perfect example of the difference between the private sector approach to cost and the government’s. Musk differs from earlier entrepreneurs like Thomas Edison and Henry Ford who became wealthy by building a better mousetrap. Musk became wealthy by harvesting government subsidies.

The LA Times ran the numbers and Musk’s Tesla Motors, SolarCity Corp and Space X “have benefited from an estimated $4.9 billion in government support.” 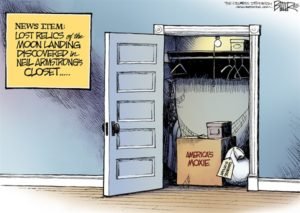 The best part about subsidy farming, as opposed to wheat farming, is that Musk isn’t required to make a profit. Tesla and SolarCity have been in business for ten years and neither has made so much as a dime.

Even more galling, much of Musk’s subsidies go to benefit one–percenter Global Warming hobbyists. Tesla buyers receive a $7,500 federal income tax credit for purchasing a new hummer that costs up to $135,000. One reason the average household income of Tesla customers is $320,000.

The one company that isn’t a subsidy vacuum is where Musk wields a sharp pencil. SpaceX has received a paltry $15 million in subsidies and much of that came from Texas when it built a launch pad. Sure Musk has $5.5 billion in government contracts with NASA and the Air Force, but he has to perform to get the money.

Musk’s lesson is his approach to recycling. When NASA was king, boosters were fire and forget. That works fine with a mortar, but applied to sending men to the moon, costs add up fast.

If you tossed the station wagon after every visit to see grandma it wouldn’t be long before the kids had only a hazy memory of what the old girl looked like. The same applies to the moon. Space priced itself out of even the federal market.

Reusing boosters would have saved money but the suggestion was viewed as crazy talk. For the bureaucrat a reusing boosters is all cost and no benefit. There are no awards in the federal service for saving money. Someone looking to spend less is not a team player, since leftover money in the budget means Congress won’t give the agency as much next year.

Recognition in the bureaucracy goes to the functionary that invents a new program with new spending, not the green–eyeshade who finds a way to do more with less. Besides the potential for bad publicity should a recycled rocket cause a mission to fail was a risk not worth taking.

That’s why SpaceX’s March 30 launch was such a milestone. It successfully launched a communication satellite into Earth orbit perched atop a Falcon 9 rocket with a first stage that had already been launched once and recovered.

Ray Lugo, who directed NASA science missions, told Florida Today, “It’s potentially a big cost-saver and it will make a difference, provided you can re-fly multiple times. If this works, over the long term it will be difficult for anyone that throws boosters away to compete.”

At least as far as SpaceX is concerned, Musk is now a money–saving fool. That launch also saw a first time recovery of the nose cone. Musk evidently had to fight NASA thinking. According to the Daily Mail, Musk ordered his engineering team to make the attempt, “Imagine you had $6 million in cash on a pallet flying through the air that’s just going to smash into the ocean. Would you try to recover that? Yes, you would.”

Maybe in the private sector, but the feds would be worried about Greenpeace activists if a fish died during recovery.

This is what competition does. Musk launches now have a cost advantage over those of Jeff Bezos, who has yet to recover a booster. Another former NASA administrator estimates SpaceX can cut 75 percent of the cost of a rocket by reusing boosters.

Musk is already offering launch discounts to customers who opt for recycled boosters.

His goal is for each booster to be used between 10 and 100 times with an additional goal of being ready to launch after a one–day turn around. That’s three times better than the turnaround time of an F-35, which under Pentagon management requires three days between sorties.

The case against privatization is always put in terms of there are just some things that only government can do, like space flight. Only, our government isn’t doing space flight anymore, because it priced itself out of the market.

But if Congress won’t give the market a chance, the solution isn’t Musk’s recycling. It’s NASA’s fire and forget.

Support Conservative Daily News with a small donation via Paypal or credit card that will go towards supporting the news and commentary you've come to appreciate.
Tags
Elon Musk NASA SpaceX