Conservatives who engage in political discussions online, especially via social media, are frequently discounted by their elitist counterparts with allegations of “cognitive dissonance.” Yet, what’s most enlightening about such an allegation is that it’s the liberal counterpart who owns the cognitive dysfunction. Rare is the conservative who is so infected.

There are two fundamental problems with such an attempt at minimizing a conservative’s arguments. Number one, most progressives don’t know what it means, and number two, cognitive dissonance is nearly exclusively the domain of the liberal mindset. 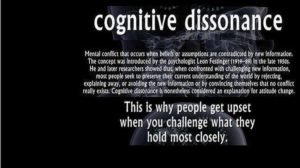 Leon Festinger, in his foundational psychological work addressing the disorder, defines cognitive dissonance as “the mental discomfort (psychological stress) experienced by a person who simultaneously holds two or more contradictory beliefs, ideas, or values. The occurrence of cognitive dissonance is consequence of a person’s performing an action that contradicts personal beliefs, ideals, and values; and also occurs when confronted with new information that contradicts said beliefs, ideals, and values.”

In other words, cognitive dissonance is maintaining two fundamentally divergent principals at the same time, oftentimes manifest by actions that conflict with stated beliefs. This condition leads to rationalization between the two conflicting positions and deductively leads to a muddled, irrational, emotion-based thought process.

Let’s enumerate some of the more obvious incongruences and logical contradictions from the liberal mindset; the evidence of their ownership of “cognitive dissonance.”

Liberals and progressives (is there really any difference?) ardently defend homosexuality and feminism, yet inscrutably serve as Western civilization’s apologists for one of the world’s religions that punishes both with disfiguration, humiliation, public shaming, and even death.

They ridicule and attempt to minimize the influence of Western civilization, thought, and culture, on the world, while it provides nearly all of the social reference points of their uni-dimentional lives. Beyonce, Oprah, The View, the alphabet soup of mainstream media, and the throes of western progressivism, all figure prominently in their “safe space” world. 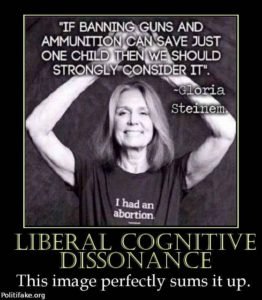 They ostentatiously denounce “bullying,” especially of presumed victims of society, yet collectively gang up, bully, and suppress those who think differently than themselves.

They profess support for the blue-collar worker. Yet when they vote for a candidate not supported by the liberal elite, they disparagingly call them “white, uneducated voters.”

They embrace the tenets of socialism and similar totalitarian regimes and ideologies, yet in an act of selective recall, ignore the mass murders of citizens perpetrated by all such regimes. They even idolize them, as with Fidel, Che Gavara, and Lenin. Similarly, in spite of their ideological reliance on socialistic principles, they are the first to apply pejorative slang terms to conservatives who fail to comport with their biases.

They constantly lament the debased state of human beings; destroying the planet, over reproducing, overconsumption of world resources, etc., yet inscrutably believe that a cadre of such fallible and imperfect sentient beings can create a perfect utopian society based on socialistic principles of coercion and “social justice.”

They claim to believe in “science,” yet only the science that is either heavily doctored, or which ostensibly supports a tenet of their ideological convictions.

They profess a disdain of firearms, even for self-defense, yet how many liberal politicians or celebrities with body guards forebear the use of the same? I can’t think of any either!

They claim to be advocates of disadvantaged minorities, yet unremittingly reject educational systems that would benefit the same with greater educational opportunities. The D.C. Voucher Program helped thousands of children attend private schools, yet no less than President Obama helped quash the program, sending those primarily disadvantaged children back to public schools.

They’re all “pro-choice” when it comes to murdering the unborn. But heaven forbid people should have a choice about much less significant things, like educational options, the kind of insurance plans we can buy, the size of our soft drinks, what we eat, and the kind of light bulbs we use. 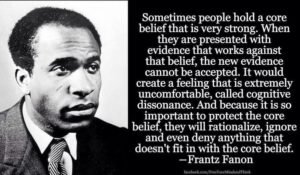 Along these same lines, liberals have no problem with the destruction and disposal of embryonic human “tissue” yet will proscribe human activity that may disrupt a Darter snail or a Spotted Owl. True to their pantheistic predilections, they will kill a human embryo, and move heaven and earth to preserve and protect a lesser life form.

And finally, they love it when the government is in control, and hands down rules, laws, and regulations to control the masses, regardless of the consequences, whether intended or not. That is, until they conflict with their sacred convictions on illegal migration, sanctuary cities, and marijuana use, for example. The federal laws are not to be upheld and enforced, in such specific instances.

Such logical incongruity truly boggles the mind. Ayn Rand articulated the importance of logical consistency best when she observed, “To arrive at a contradiction is to confess an error in one’s thinking; to maintain a contradiction is to abdicate one’s mind and to evict oneself from the realm of reality.” Which, according to clinical psychologist, Dr. Lyle Rossiter, is actually evidentiary of mental instability, (detachment from reality), as he argued in “The Liberal Mind: Psychological Causes of Political Madness.”

Conservatism is not an ideology of totally homogenous and monolithic thought, and as such, some who so self-identify may harbor some either explicit, or implicit, dichotomous beliefs. However, from an ideological perspective, based on the literal and logical denotation, “cognitive dissonance” is virtually the sole purview of the liberal/progressive mindset. In fact, as replete as their belief system is with cognitively dissonant concepts, it could hardly be called an “ideology” at all, but rather a disjointed, illogical, and fatuous conglomeration of incongruent hypotheses.

Support Conservative Daily News with a small donation via Paypal or credit card that will go towards supporting the news and commentary you've come to appreciate.
Tags
Cognitive Dissonance