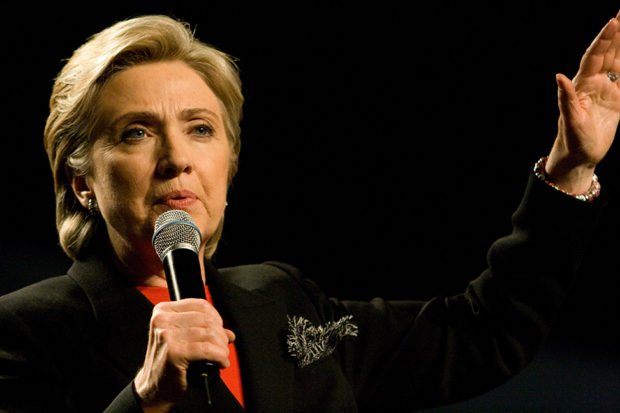 Hillary Clinton’s “It’s not my fault” tour continues unabated. The list of reasons for her 2016 election loss to Donald Trump grows with each passing day. Remarkably, none of those reasons are named Hillary Rodham Clinton.

Here is Hillary’s fluid and ever-growing list of the reasons for her election defeat – from her perspective:

As the Director of the FBI, Comey had the audacity to actually investigate my secret bathroom email server I set up while I was Secretary of State. Twice! Didn’t he know that I’m a Clinton and there are no rules for Clintons? Ask anybody, like me or Bill. Heck, ask Chelsea, if you can catch her in between accepting another award for being…Chelsea.

But the whole email thing was a ‘nothing burger’. And so was my campaign.

Wikileaks actually published internal Democratic emails about the campaign, thereby exposing the truth. Those bastards! The truth is what I say it is!

Huma Abedin forwarded many classified emails she received from me to Weiner. It’s not like Weiner would ever do anything improper, right?

Those damn Russians! If they only liked me better, they would have colluded with my campaign and then we wouldn’t even be having this discussion over who’s to blame for such a wretched campaign. I could have used 1,000 Russian agents on my side. I remember when Russian agents, like Alger Hiss, liked Democrats. Hell, they were Democrats!

Now he knew how to spy! Damn him for being born 60 years too early.

Those damn Russian Cossacks! There actually hasn’t been a Cossack sighting in about 70 years, but, well, what difference at this point does it make?

If he didn’t run in 2008 I would have been a shoe-in then. Instead, he runs and everybody thinks he’s all that because of his race. Joe Biden said he was appealing because he was clean. Big damn deal, I’m a woman! And I shower almost every day. It was my turn in 2008.

Then he makes me Secretary of State. I didn’t want the damn job, but Bill said it would be great and I could waltz into the presidency in 2016. It was my turn in 2016, but compared to Obama I looked like leftover pot roast. I hate pot roast! If I was never Secretary of State I wouldn’t have needed that damn server and Comey wouldn’t have been on my back about it. Barack, you owe me.

My campaign really relied a lot and spent heavily on analytics, My staff believed that it would be far better to rely on that than a candidate as lousy as me. Unfortunately, they used baseball analytics. As a result, during the second debate with Trump, moving the third baseman to the right side of second base and the second baseman to shallow right field proved pretty worthless and in retrospect didn’t really seem to make any sense.

If I were a man I would have beaten Trump. It’s all of his misogynist supporters. They wouldn’t vote for me because I’m a woman. Sure, I’m bitchy and difficult to get along with, but so is Bill and everybody loved Bill, especially women. Um, never mind.

They did nothing for me. They were broke, you know, like Bill and I used to be before we started getting big fat speaking fees. The DNC had the audacity to stack the rules in favor of me. Everybody expected me to win. I expected me to win. They cheated in my favor, but not enough. They expected me to campaign in every state. I went to some states, the ones with really good restaurants. They didn’t know what they were doing. I know how to cheat.

My pantsuits never caught on. I don’t get it.

There was all this fake news about me. And by fake news I mean the truth. It seems that Trump had a bunch of Twitter followers and some of them could be phony, created by some bots in Macedonia or someplace. If anyone knows phony, it’s me. I don’t even know where Macedonia is, although I probably went there once as Secretary of State. And what’s a bot? It doesn’t matter, it’s their fault.

Sure, I had every Hollywood celebrity in my back pocket. So what? Nobody goes to see the crap Hollywood puts out anymore, so nobody pays attention to Hollywood celebrities. I don’t even know who Eva Longoria is? But, Bill probably does.

Everything bad is due to climate change and nothing is worse than me losing the election.

They usually vote Democratic. Obama cleaned up with these folks, but they didn’t vote for me. I don’t think they own many pantsuits. I hate dumb people.

Where were these people? I carried Martha’s Vineyard bigtime, but everyone else went for Trump. I hate smart people!

So what if I said I’d put coal mines out of business? Coal miners could just get speaking engagements in front of Goldman Sachs executives. It’s not that hard. You don’t have anything that makes sense. I do it all the time. What were they complaining about?

Of all the years they pick to win the World Series they decide to do it in 2016. Why couldn’t they do as they have done for the last 107 years? Instead, they make everybody think that anything is possible, like Donald Trump getting elected. And I was even a Cubs fan. Or was it the Yankees? I hate the Cubs! I hate baseball!

The Two Guys in the Sonic Commercials

I don’t think those two guys like me for some reason. I think they are Russian agents. I hate fast food!

Those creeps over at Fox News never play fair. Why didn’t they just toe the line like the rest of the media? The New York Times, Washington Post, NBC, ABC and CBS were all in my corner. MSNBC was a huge cheerleader, even if they had to make stuff up. Sure they are a bunch of clowns there, but they were my clowns.

But the Fox folks are sorta conservative for some reason. Plus, they think I lie and cheat and steal. Yeah, so? I don’t get their point?

This is by no means an exhaustive list. Fortunately, Clinton has stated that she will be writing a book about the campaign. (Working title – Blameless: The Fictional Account of the Most Embarrassing Defeat in American Electoral History) There can be no telling how many people she can blame in 400 pages or so. Alas, Hillary Clinton will still not be among them.

Support Conservative Daily News with a small donation via Paypal or credit card that will go towards supporting the news and commentary you've come to appreciate.
Tags
2016 Election News James Comey

Curtice Mang is the author of two books, The Constitution - I'm Not Kidding and Other tales of Liberal Folly and The Smell of Politics: The Good, The Bad and The Odorous. He is a regular contributor of commentary and political satire to multiple websites. He lives in Phoenix with his wife.