Why, all of a sudden, is God unconstitutional in this country? America was founded on Judeo-Christian values, the Ten Commandments are posted in courtrooms, In God, We Trust is on our money, and there is a national day of prayer. But somewhere along the line, God became unconstitutional. The first amendment of our constitution guarantees us freedom of religion, but we now seem to think that it says freedom from religion.

Here is what she wanted to say; “Lord, surround us with grace and favor everywhere we go,” she prayed. “Soften our hearts to teach us love and compassion, to show mercy and grace to others the way that you showed mercy and grace to us, even to the ultimate sacrifice. Help us love our brothers and our sisters deeply. Lead us to bless them.”

We have a society that dismisses God, but what do we celebrate? Unwed motherhood, drug use, homosexuality and other perverted lifestyles, abortions, same sex marriage; prostitution is now glorified as sex workers. When I was growing up it seemed like society had certain parameters that were followed. Sure we had all those things that I mentioned, but it was never celebrated, all those things were wrong and society frowned on it.

We hear about a football coach who for 20 years said a prayer with his players before a game, 20 years it was no problem. Now it’s unconstitutional and the coach loses his job, why? Christmas plays at school have been going on for hundreds of years, now that’s a no, no because it’s about God and you can’t even call it a Christmas play anymore, it is now a winter play. Never mind that Christmas is a Federal holiday and the birth of Jesus.

I hate to say this but America is no longer a moral country, our values are shot and our morals are shot. We can no longer lecture other countries about what they do wrong when our own value system is corrupt; it’s not hard to see that God is the missing link in our country and without him, America is lost. It’s time to make God constitutional again. 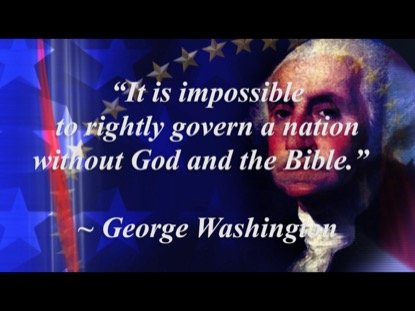 Support Conservative Daily News with a small donation via Paypal or credit card that will go towards supporting the news and commentary you've come to appreciate.
Tags
America God Ten Commandments