Until very recently medical tourism was traveling from your home to find less expensive medical care, usually overseas. Medical tourists were leaving the warm embrace of the American Medical Association and the FDA to journey far from home. There were three motivations: Elective plastic surgery not covered by insurance, wanting to try an experimental procedure not covered or getting surgery done without benefit of any insurance at all. 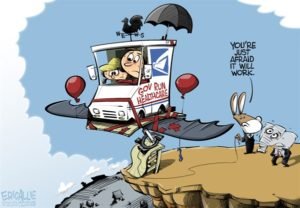 That’s why breasts were being lifted in Brazil and hips replaced in India. Particularly courageous patients scheduled foreign heart transplants. I know all about this because I was almost a medical tourist myself. A few years ago we had what was laughingly called health insurance. Our deductible was so high you had to have been on life support for a week before coverage started.

I had a sports hernia, which meant the problem was on my dime. While pondering options, I devised an effective, temporary solution for the gym. After carefully folding a washcloth over the leak, I’d wrap myself with a giant Ace bandage.

Frankly, I liked my new slim waistline with only a hint of bulge in the intestinal wall. There were days when the Ace came loose and I trailed spandex out of my shorts like toilet paper stuck on a shoe, but it was a small price to pay.

The wife didn’t agree. Janet said it was gross and told me to quit procrastinating and get the hernia fixed. The medical tourism broker’s choice was Thailand or Oklahoma City. I couldn’t see paying $1,000 for an airline ticket on top of the procedure when the Okies were so much closer. Even then the procedure would set me back about $4,500.

That was still too much. In the end I opted for Dr. Amazon and bought a 12–dollar truss, which didn’t make me look as slim, but kept my lower tract in place.

California politicians have a proposal before the legislature that would totally eliminate my worries about cost. Instead of patients traveling overseas and paying for medical care, California politicos will have foreign patients coming to the Golden State and it won’t be to consult with me about trusses.

After the airline ticket or the coyote’s bill is paid financial worries are over. California taxpayers will cover the rest.

That’s just one of the disasters awaiting passage of what the LA Times terms “government–run universal healthcare.”

The Times description: “SB 562, would establish a publicly run healthcare plan that would cover everyone living in California, including those without legal immigration status…The state would pay for all medical expenses, including inpatient, outpatient, emergency services, dental, vision, mental health and nursing home care.”

Talk about no “pre–existing” condition worries. One doesn’t even have to be a pre–illness resident. Just make your way from the airport or border crossing to the hospital and watch the doctors scrub up. California welcomes Anchor Babies and Anchor Patients!

Lefty politicians claim the program will be paid for by what is nebulously described as “broad–based revenue.” This sounds ominous to me. California’s tribal Democrats oppose rounding up illegal aliens, but they have no qualms about corralling taxpayers and squeezing them until their wallets pop out like hernias.

Supporters of the bill were the usual suspects: Unions looking for guaranteed taxpayer–financed positions with permanent job security and clueless members of “Our Revolution,” a Bernie Bros conglomeration.

The support of the Saunders’ crowd is particularly interesting because Vermont tried a version of single–payer healthcare and it was so expensive it collapsed before it was implemented, which must be a record of some sort.

In Vermont the bill was passed and prior to the program’s kickoff the legislature got cold feet and commissioned a financial projection study. It found the cost would be $4.9 billion a year, which would double the state budget. To pay for it payroll taxes would have to be increased 11.5 percent, individual income taxes would jump 9 percent and a border wall would be built to keep rich people from fleeing to cheaper states.

The governor and legislature were so taken aback the plan was shelved.

Cost estimates for the Golden Fleece, I mean Golden State plan put the yearly total at more than double (there’s that word again) the state’s current budget of $180 billion. But there’s no need for California single–payer fanaticists to worry, their legislature never learns. They plan to seize the $50 to $100 billion the private sector currently spends on employee health insurance and then wait for the rest of the money to turn up.

In the meantime many trips are anticipated at taxpayer expense. Legislative “fact finders” are planning trips to Canada, Taiwan and Maryland to learn “best practices.”

The only place they won’t visit is Vermont.