The Air Force X-37B space plane landed Sunday at Cape Canaveral, Florida. As the plane descended to the airfield, it created sonic booms that could be heard throughout central Florida.

The #AirForce #X37B #OTV4 has returned from orbit and has landed safely @NASAKennedy. Stay tuned for more info.

The X-37B spend 718 days in orbit on a classified mission.

This was the fourth landing of the military “mini-shuttle” that Air Force officials say is testing several technologies.

“The primary objectives of the X-37B are twofold; reusable spacecraft technologies for America’s future in space and operating experiments which can be returned to, and examined, on Earth,” officials said.

The X-37B is the first vehicle since the Space Shuttle to be able to return experiments to Earth for further examination. And the mini-shuttle can stay in orbit for 270 days or more without resupply as it carries no crew. This allows for long-term, zero-gravity and zero-atmosphere research.

The #X37B #OTV4 is the newest and most advanced re-entry spacecraft. Find out more about today's landing here: https://t.co/GUGgOMQiYg pic.twitter.com/HfHHVnWhYc 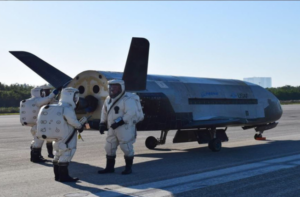 Other than the v-tail design, its smaller size and the lack of rear main engines, the X-37B closely resembles the Space Shuttle orbiter.

Support Conservative Daily News with a small donation via Paypal or credit card that will go towards supporting the news and commentary you've come to appreciate.
Tags
Kennedy Space Center Space Plane The Air Force The X-37B