Another Earth Day has come and gone.  As I watched people marching across America on TV I said to myself, “I bet 90% of these people have no clue what they are marching for.”  Then, when being interviewed, some protesters said that climate change was a bigger threat to the U.S. than ISIS. WOW, talk about brain dead people.

For those of us who were around in the 1970’s we can remember that the big threat was a new “ice age.”  Yes, they were claiming that the globe would be covered with ice by the mid-1980’s if something was not done quickly. Magazine covers displayed a baron wasteland covered with ice, humanity gone, if we sat by and did nothing.

The 1980’s have passed and guess what? No “Ice Age.” This freaked out the people on the left, how could they be so wrong? So they said they had made a mistake, science now says that the earth was warming at an alarming rate and something must be done because all the ice at the North Pole was melting and the seas were going to rise and drowned us all.

When promoting his Oscar-winning documentary, An Inconvenient Truth, Al Gore declared that unless we took “drastic measures” to reduce greenhouse gasses, the world would reach a “point of no return” in a mere ten years. He called it a “true planetary emergency.” Ten years passed and everything is as before. One of the first claims Gore had made was about Mount Kilimanjaro in Africa. He claimed Africa’s tallest peak will be snow-free “within the decade. It’s been a decade and there’s still snow on Kilimanjaro year-round.

Let’s face it Al Gore is nothing but a big con-artist, he spread his bull and raked in billions of dollars, which was his intention from the beginning. Gore warned increasing carbon dioxide emissions would spur catastrophic global warming, which would cause more extreme weather, wipe out cities and cause ecological collapse. To stop global warming, humans needed to ditch fossil fuels and basically change every aspect of their lives. Typical Liberal, telling us we must change our lifestyle, while he refuses to change his. He still drives in big SUV’s, flies in fuel guzzling jets, lives in huge mansions that drain our electricity.

If any one of those marchers just took the time to sit down and read about the earth’s history, they would find that the earth has been warming and cooling since God created it.  It’s a natural phenomenon.  If they also took the time to read about 1816, which they call the year without a summer, they might be surprised. In August of 1816, there was a frost around the globe; there was ice on the rivers in the North East of America and Europe was freezing. Remember this is before fossil fuel, cars, planes, SUVs and everything else that Al Gore says is destroying the earth.

It has gotten to the point that every time there is a hurricane, or tornado, or snowstorm or even when the temperature goes over 90 degrees that a bunch of climate Nazi’s say the world is at an end. Don’t these people have better things to do, like get a job?

Investors Business Daily calls Gore a “FRAUD.” They said; “The terrible truth for Gore is that there is no planetary emergency. Not one of the dire predictions he and the alarmist community made have come to pass. There is plenty of evidence that they have been running a racket.” Al Gore scammed half the world and made himself billions of dollars while doing it, you’d thing he made enough money by inventing the Inter-Net.  This guy puts Bernie Madoff to shame, why isn’t he in jail? 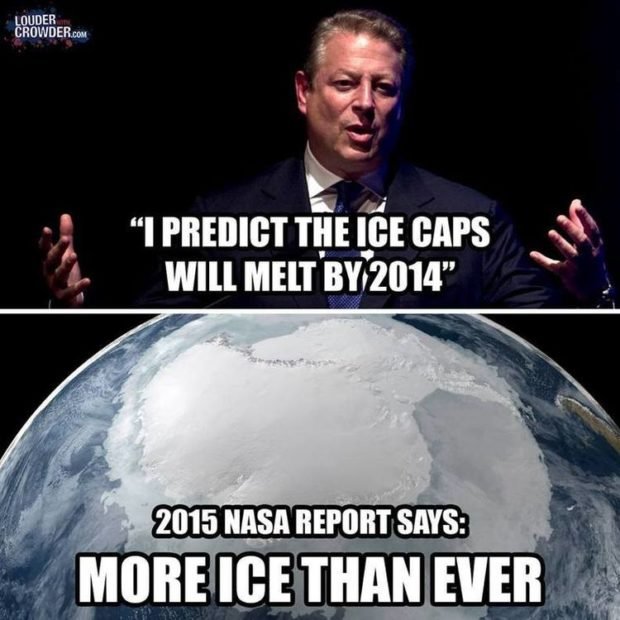 Support Conservative Daily News with a small donation via Paypal or credit card that will go towards supporting the news and commentary you've come to appreciate.
Tags
Al Gore climate change Politics