Al Capone was famous for saying,”You can get farther with a kind word and a gun, then you can with just a kind word.”  Well, the world is now on alert, America is back. After eight years of a limp president, Donald Trump has told our enemies that we will not be pushed around any more and he let our friends know that once again you can count on America to stand with them.

The longer Donald Trump is in office, the more we see how inept and weak Obama was. Obama’s leading from behind strategy was a joke; leading is what Donald Trump is all about, the only thing Obama was good at leading was leading this country down a path of division. When Obama drew a red line and did nothing, our enemies knew they could pretty much do what they wanted and Obama would do nothing.

Donald Trump proved that if you Slaughter the innocent, there’s one country left in the world that won’t allow it. While the Democrats hang on to the false narrative that Donald Trump colluded with the Russians to win the election, he is proving to the world that America once again has a strong leader at the helm. He has not even been in office 100 days and he has proven to be 10 times the leader Obama was in 8 years.

There are two things that make a good leader:

Let’s face it; the whole world is paying the price for Obama’s inept leadership, the rise of ISIS, Russia’s takeover of the Ukraine, the millions of refugees flooding into Europe, the gassing of innocents in Syria and the millions of criminal illegal immigrants killing American citizens lies directly on Obama’s shoulders,. History will not be kind to the Obama presidency; you have to wonder how he can sleep at night with so much blood on his hands.

Donald Trump said that “He was handed a mess” when he took office, he was right, fixing the mess that Obama left behind won’t be easy, but I think he is the man to get it done. MAKE AMERICA GREAT AGAIN. 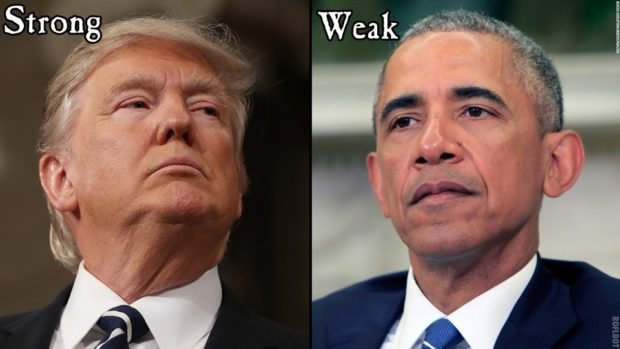