A judge in the federal Court of the Northern District of California has granted an injunction against President Trump’s executive order halting grants to sanctuary cities. 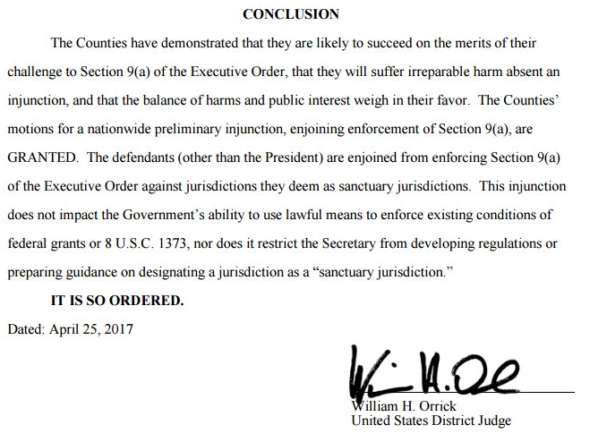 Section 9 and the corresponding 9(a) read:

Sec. 9.  Sanctuary Jurisdictions.  It is the policy of the executive branch to ensure, to the fullest extent of the law, that a State, or a political subdivision of a State, shall comply with 8 U.S.C. 1373.

The subsection referenced by Judge Orrick allows the Attorney General and Secretary of DHS to make ineligible any jurisdiction that willfully refuses to comply with immigration law.

Support Conservative Daily News with a small donation via Paypal or credit card that will go towards supporting the news and commentary you've come to appreciate.
Tags
activist judges Illegal immigration Sanctuary Cities