I truly believe that the whole world has gone mad. Every time I turn around there is a new idiotic Liberal coming up with something that makes absolutely no sense what so ever and what kills me is that there are idiotic people that go along with it. For those of us who don’t go along, it is shoved down our throats and we are called bigots if we protest about it.

You can call me what ever you want, but there are only two genders, male and female, always has and always will. But in the sick world that we now live, there are Liberals who think that there is a list of other genders that they want us to adhere too. It seems that in Indiana parents are furious after eighth graders at Lincoln Junior High School were exposed to a classroom lesson on sexual orientation, gender expression and gender identity issues, without being notified in advance by the school district.

As you can expect many parents were outraged (what normal parent wouldn’t be?) that this would be forced on their kids without notifying parents first. One parent said, “The video turned my stomach, it’s nothing less than indoctrination. This has nothing to do with health class. It’s purely political.” And we trust these idiots to educate our kids?

This is not an isolated incident, it’s spreading all over the country, take the University of Iowa. The school joins a growing list of colleges that are moving beyond “he” and “she” and “him” and “her.” Students and faculty will now be required to use their gender-neutral options “ze,” “zem,” “zir or hir,” “zirs or hirs”—if that’s what the student being addressed wants. Once again I must say there are two genders and two genders only, male and female, that’s him and her. To make matters worse the university is also plunking down $30,000 to add new signage on 147 single-occupancy bathrooms reading: “Anyone can use this restroom, regardless of gender identity or expression.”

It’s just like the fight that many states are having with the so called bathroom law; they want men and women to use the same bathroom, showers, locker room etc. You can call me old fashioned, but if a man walks into the bathroom where my daughter or granddaughter are doing their business, that man is not walking out of that bathroom, he will be carried out.

Now to top it off my home town of New York City has really gone off its nut. But with the Socialist, Communist, Liberal, Progressive Mayor Bill de Blasio what can you expect. He has made a list of 31 different genders, here is a list.

To top it off failure to comply with the NYCCHR’s views on gender identity, by committing what it deems to be “gender identity” based discrimination, can be punished with a fine of up to $250,000. It sought of makes me glad I left that city, I couldn’t even think about bringing up a kid in that kind of environment.

A while back I wrote an article titled “America Is In The Age Of Stupidity” and 31 genders sure fits in to that narrative. When we are born we are either male or female that’s it, you can pretend and call yourself something else all you want, but reality is reality and you can’t change it. If you think you are something else you have a mental problem and I suggest you get yourself some help, Quick! 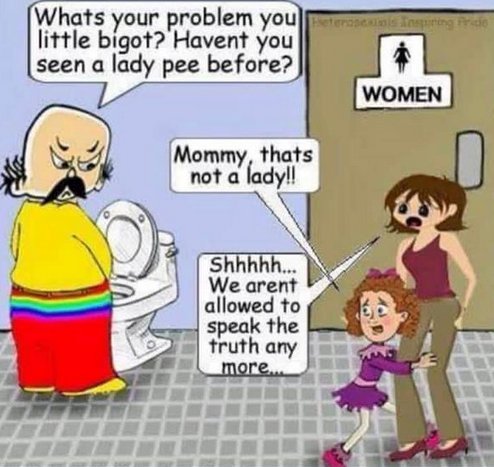 Support Conservative Daily News with a small donation via Paypal or credit card that will go towards supporting the news and commentary you've come to appreciate.
Tags
gender identity Politics