A House Permanent Select Committee on Intelligence spokesperson has refuted media reports that General Michael Flynn has offered to testify in exchange for immunity.

News outlets, including this one, reported Thursday that Flynn had offered to testify based on information in a Wall Street Journal report.

CDN asked the House Intelligence Committee for comment on the story but the response was not what was expected:

We are working on stories around Gen. Michael Flynn’s offer to testify to the House and Senate Intelligence committees as well as the FBI in exchange for immunity from prosecution. We are requesting comments from all three agencies and would like to include one from Rep. Nunes.

The story is incorrect. Michael Flynn has not offered to testify to HPSCI in exchange for immunity.

Spokesman Jack Langer denied that Flynn had offered to testify in exchange for immunity and called the Wall Street Journal story “incorrect.”

When the FBI was asked by CDN the same questions, the law enforcement agency declined to comment.

Media reports refer to a statement from Flynn’s attorney as proof that he has offered to testify, but the statement says no such thing. 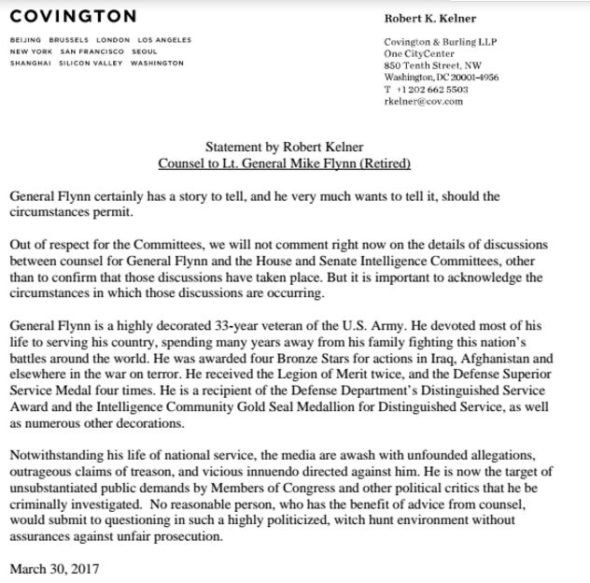 The statement only says that “discussions” have taken place between the House Intelligence committee and Flynn’s legal counsel, but does not divulge the subject nor outcome of the talks. Flynn’s legal team has brilliantly put his “offer” in the limelight without actually offering anything.

While the Trump administration is well-known for calling such things “fake news,” it now appears that the Wall Street Journal has managed to print one that even congress disputes.

This story was created without the use of anonymous sources.

Story updated 3/31/17 06:45 am: Added Flynn’s attorney’s letter into the article as mass media is referencing it as proof of offer

Support Conservative Daily News with a small donation via Paypal or credit card that will go towards supporting the news and commentary you've come to appreciate.
Tags
Michael Flynn Russia