With all too few exceptions, the level of political and cultural discourse across our fair land has devolved to a level so unpalatable and uncivil as to discourage any serious discussion of the salient issues of our time. Rather than a cogent, civilized discussion of the issues and possible solutions, most political exchanges immediately resort to acrimonious name-calling, ad hominem attacks, and vitriolic accusations. If we are to ever function again as United States, we must learn to rise above the base and visceral instincts that contaminate contemporary public discourse, and start acting like adults addressing the critical issues we face as a nation. 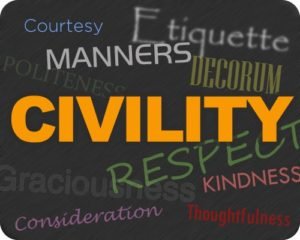 Not only are the policy issues contaminated by the lamentably degraded level of discourse, but our very culture and social fabric is vitiated by the level of acrimony the opposing sides of the political spectrum hold for each other. When all one has to say is they voted for Trump, or they support something he’s done, and they are called every pejorative name in the liberal lexicon of odious epithets, it’s obvious that something is seriously lacking in our social construct.

On social media, online blogs, or even in person, political discussions invariably degenerate to a scurrilous level when opposing sides face off. Actually, for one side of the equation, it never gets any farther than, “I voted for Trump,” with the immediately ensuing reaction assuming the following form: “You’re a racist, homophobic, xenophobic, Islamophobic _________,” and you can fill in the blank with your favorite repugnant expletives or aspersions.

Nothing good can come from such mean-spirited, emotion-based eruptions. And conversely, our social fabric and common human denominators are stretched and frayed detrimentally for all of us, by such immature and disrespectful reactions. One must wonder what is lacking in one who reacts so viscerally. Are they lacking maturity, class, civility, a sense of shared humanity? Perhaps the answer is “E, All of the Above.”

Perhaps it’s mostly a lack of maturity. A noted child psychologist says of name-calling, that it’s a “part of a preschoolers natural development.” So what does that say of a 20, 40, or even 60-year-old person who lashes out with name-calling and casting aspersions? That they still possess a prepubescent level of maturity that has stunted their development to the point where they are incapable of conversing with someone of an opposing view as an adult? It would appear so. 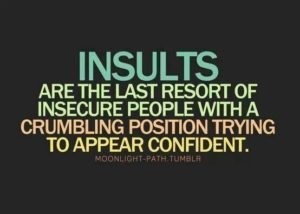 Another noted psychologist says, “Name-calling is one of the most common tactics people use to hurt others or disparage them. It often occurs when someone has an emotional argument to make with little or no supporting logical argument.” This perhaps gets to the heart of the issue. Shouldn’t the issues of state be resolved based on logic and reason, rather than emotion? A logical approach identifies the problems, and based on reason and hopefully empirical data, works through possible solutions. If anything, emotion clouds judgment and impairs logical analysis, and especially taints the discourse employed in the resolution process when it subordinates logic.

The Apostle Paul said in 1 Corinthians, “When I was a child, I spake as a child, I understood as a child, I thought as a child: but when I became a man, I put away childish things.” It’s high time all Americans cast aside their bigotry, their childishness and immaturity. It’s time to quit inciting violence and mayhem because we don’t agree with someone else, even the President. It’s time to grow up and discuss issues with cogency, based on logic and reason, and put the cork in the petty and meaningless appellations, denigration, and name-calling. 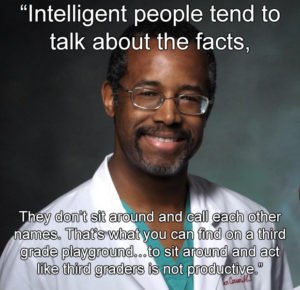 Yes, that applies to both sides of the political spectrum. But it especially applies to those who can’t get over the fact that their candidate lost in November. Those who will destroy property, attack those who believe differently, and riot at everything the new president says or does. Those who can’t accept the fact that people across the country are fed up with Washington edicts that are based not in reason, but in an ideology that has enervated and vitiated the republic for the past eight years. Those who bitterly cling to their liberalism in spite of the majority of America rejecting it. Those who are so filled with bigotry and hate that they verbally, and sometimes even physically, pummel those who think differently. William F. Buckley nailed it when he said of the left, “Liberals want to give a hearing to other views, but then are shocked and offended to discover there are other views.”

We’re not all going to agree. Heck, even conservatives disagree among themselves over various issues, let alone trying to reach a common ground with liberals. But the meanness and vitriol that dominates the public discourse is a scourge to our society, and a potentially terminal cancer that is eating away at the soul of our humanity. If you can’t discuss the issues of the day with calm and reason, don’t engage, because you’re only hurting the nation and our society more. If you can’t put away your childish things, like name-calling and ad hominem attacks, then wait until you have the maturity to do so, without further contaminating the public square.

Years ago when I first learned to type, we had a phrase that we’d practice with, over and over. It was, “Now is the time for all good men to come to the aid of their country.” This sentiment was echoed by President John F. Kennedy when he declared in his inaugural address, “Ask not what your country can do for you, but ask what you can do for your country.” The best thing we can do for our country right now is come to the public square, be involved and informed in the political process, but do so with civility and maturity, casting aside our bigotry (lack of tolerance for those who think differently), and our calloused derision and aspersions.

When we can learn to discuss our national challenges with those who believe differently, with civility and reason, there is hope that we can again be a United States of America. Without that conviction, and the concomitant actions born of that conviction, there is no hope. But the choice is ours, individually. Do we want to be part of the problem, or part of the solution. We can’t force others to comport with civility, but we can control ourselves, and hopefully influence others for good along the way.

Support Conservative Daily News with a small donation via Paypal or credit card that will go towards supporting the news and commentary you've come to appreciate.
Tags
civility