The New York Times found a vaguely Christian church that merits approval. This is harder than it seems. While the Times sets a low bar for approving mosques — no exploding members in the last six months — standards for Christian approval are much more stringent.

Happily Philadelphia’s Arch Street United Methodist Church is a “reconciling” church, which evidently means reconciling the Bible to embrace leftist cultural fads, rather than changing culture to reconcile with the Bible. 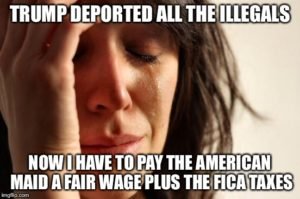 Arch Street is an eager participant in the left wing conspiracy to subvert immigration law. It has joined the “Sanctuary Movement” that harbors illegal aliens on church property. Arch Street’s sanctuary program is starting small. It’s getting its feet wet — is that a slur when writing about Mexicans? — by hosting one illegal: Javier Flores who’s been sleeping on a cot in the basement for the last six weeks.

Secular journalists like nothing better than using the Bible against believers and when pastors are enthusiastic helpers, so much the better.

Rev. Robin Hynicka justifies his rebellion by citing Matthew 25: 34 – 36 and explaining “Jesus said we are to provide hospitality to the stranger.” But Flores has evidently made himself quite at home since he arrived in 1997. He’s been arrested nine times, served a felony prison sentence and was wearing an ankle bracelet when Hynicka offered asylum. Evidently the good reverend offers a no–fault, no–judgment, no–salvation ministry, because Flores’ family isn’t burdened by any marriage obligations.

Hynicka’s politically motivated reading of the Bible makes perfect sense to ignorant reporters, but it’s important Christians know how wrong he is. Hynicka is a heretic for three important reasons:

Cultural Christians like Hynicka and the media both suffer from Mistaken Lazarus Syndrome. The only Lazarus in the Bible was a friend of Jesus that He raised from the dead. Emma Lazarus is not found in the New Testament, although she is frequently disinterred to support obstructing immigration law.

Even that isn’t relevant since “Give me your tired, your poor” was written in reference to a statue not a statute and has no bearing on case law or Commandments.

Paul’s Letter to Philemon makes Hynicka uncomfortable because Paul demonstrates Christians are required to follow the path of truth. The letter concerns Onesimus; a runaway slave who stole from his master and fled to Rome while Paul was imprisoned there.

In contrast to Hynicka’s “come and sin some more” philosophy, Paul converted Onesimus. He repented under Paul’s guidance and became a new man. Then came the hard part. Paul loved Onesimus and, like the freelance landscapers in the 7/11 parking lot, he was useful around the house.

Paul recognized that like all Christians he has personal and public obligations. He fulfilled his personal obligation to Onesimus by introducing him to Christ, changing his life and making him part of his household. Paul’s public obligation was harder. He was required to “render unto Caesar” and obey the law.

Instead of offering Onesimus sanctuary, Paul sent him back to his master, Philemon, with the letter that forms the book. Onesimus faced a penalty much worse than an ankle bracelet and a bus ride. Under Roman law both theft by a slave and running away merited the death penalty. Fortunately, Philemon was a friend and fellow Christian.

The letter acknowledges the violation of the law and the consequent requirement for restitution or recompense. Paul personally offers to pay any damages or compensation owed by Onesimus. Then he asks Philemon as a fellow Christian to greet the returning slave as a brother and to free him.

The request for freedom adheres to God’s law and the decision to grant or not grant it is in accordance with Caesar’s law.

The Christian approach to illegal aliens is to personally care for immediate physical needs and then help the illegal to return to their country or put them in contact with immigration authorities. Christians who disagree with immigration law are free to petition the government and vote for politicians who share their views. They are not free to contribute to a growing disrespect for the rule of law.

It’s a course of action that won’t get a fawning profile in the New York Times, but it will put you in accord with the Bible.