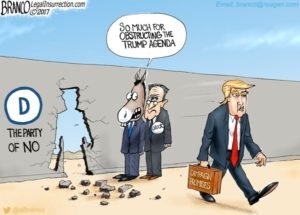 President Trump isn’t taking it easy this Saturday. He’s not lounging in front of the television at the White House nor jetting off to Hawaii for a round of golf.

The President will start his morning with a phone call with Japan’s Prime Minister Shinzo Abe to discuss trade now that the U.S. has exited the Trans-Pacific Partnership (TPP.)

In the midst of the phone calls with world leaders, President Trump will be signing another set of executive orders.