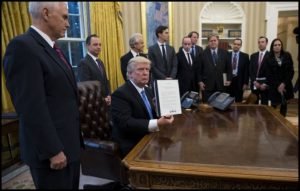 President Donald Trump signed three executive orders on Monday one of which ended funding for foreign groups that promote abortion.

The policy was originally put in place by Ronald Reagan and has been dubbed the “Mexico City Policy.”

“President Trump is continuing Ronald Reagan’s legacy by taking immediate action on day one to stop the promotion of abortion through our tax dollars overseas.” Marjorie Dannenfelser, president of the Susan B. Anthony List said in a statement.

“He wants to stand up for all Americans, including the unborn, and I think the reinstatement of this policy is not just something that echoes that value, but respects taxpayer funding as well,” White House press secretary Sean Spicer told reporters in a briefing Monday afternoon.