Listening to Barack Obama’s “Farewell Address” this week was a painful exercise of masochism. Not only was it inordinately long and unwarrantedly replete with self-adulation, but the detachment from reality and sheer mendacity throughout was just too much for anyone with even a cursory grasp of the facts. And he regrettably made it clear that it wasn’t really a farewell speech – he’s not going away. 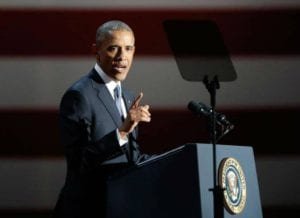 The President’s speech lasted a whopping 53 minutes, which made it longer than George Washington’s, Ronald Reagan’s, and Harry Truman’s farewell speeches combined. At least he has made progress over the years, from a narcissistic standpoint. He referred to himself in the first-person singular 57 times, mostly in self-laudatory statements. That’s a vast improvement from his announcement speech nine years ago which featured 208 self-laudatory references in just 22 minutes.

The first major misrepresentation was in reference to his signature legislative achievement, Obamacare, when he said he had “secure[d] the right to health insurance for another twenty million of our fellow citizens.” In this age of the entitlement mentality, too many feel they have a “right” to all manner of things, from health insurance to a college education. They may be necessities, but there is nothing codified that designates them as “rights.” Even with Obamacare’s mandates, health insurance is requisite to avoid penalties from the government, but it is not a “right.”

The most colossal misrepresentation of the speech also was in reference to health care. “Health care costs are rising at the slowest rate in fifty years.” The only way he could make such a claim is to exclude the cost of healthcare insurance from the cost of healthcare, which is immensely disingenuous. According to the Kaiser Foundation, “The cost of medicine, doctor appointments and health insurance rose the most in August of 2016 than any other time since 1984. The average family health care plan is projected to grow this year at a faster rate than wages.”

And the healthcare cost increases show no sign of abating, under the umbrella of the president’s signature healthcare law. In October, the administration announced that insurance premiums would increase an average of 25% across the 39 states serviced by the federal healthcare exchange. And because of the law, as well, about 20% of those health insurance customers will have only one insurer available. No alternatives or options to choose from. 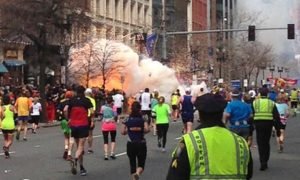 As disturbing as that claim was, there was another that was equally egregious. “No foreign terrorist organization has successfully planned and executed an attack on our homeland these past eight years,” the president proudly proclaimed. The phrasing of the statement is so precise that it ignores the reality that there have been at least 13 Islamic-extremist attacks on the homeland in the past eight years. These may not have been “planned and executed” by a “foreign terrorist organization,” nor to the scale of the attacks of 9/11/01, but they were perpetrated by jihadists, some even homegrown.

Victims of Islamic extremist attacks in Fort Hood, Boston, Chattanooga, San Bernardino, and Orlando, to name but a few, would undoubtedly take exception to the president’s assertion. And what’s equally disturbing, is the fact that not only has the president failed to correctly identify these enemies of the state based on their ideological convictions, but that ISIS, the dominant Islamic extremist group in the world at this time, is largely of the president’s creation. Without his attempts to provide arms to them in Syria while fighting the Assad regime, and his premature extraction of U.S. troops in Iraq, ISIS would never have grown to their current global stature.

One statement he made was pretty accurate. He said, “But for all the real progress that we’ve made, we know it’s not enough. Our economy doesn’t work as well or grow as fast when a few prosper at the expense of a growing middle-class and ladders for folks who want to get into the middle class.” Regrettably, it’s his policies that created our economic malaise. 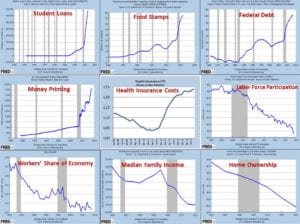 We have 8 million more Americans in poverty; 13 million more dependent upon food stamps; the lowest labor participation rate in a generation with 95 million Americans out of the labor force; the lowest home-ownership rate in 51 years; the worst post-recession recovery in modern U.S. financial history; and a 110% debt to GDP ratio, which our own government declares is “unsustainable.” All of this achieved while under his watch, and his policies created the miasma.

He advocated unity throughout his speech, yet he has been arguably the most divisive president ever. On race, law and order, class envy, and criticism of his opponents, he has fomented discord, animosity, distrust, and divisiveness with nearly every speech, public appearance, and policy. And he had the temerity to accuse congress of being “dysfunctional,” since they refused to cave to his demands and stood by their principles. So by his logic, he must be dysfunctional too, for refusing to compromise and for standing by his convictions as well.

What’s immensely ironic about this speech being dubbed his “Farewell Speech,” is that it really wasn’t one. He doesn’t plan on going anywhere. After his successor is sworn into office next week, Obama will be the first ex-president since Woodrow Wilson to stay in D.C. when his term ends. He made it clear in his comments this week that unlike the class displayed by George W. Bush who has refused to criticize his successor, Obama is going to be vocal, and politically active. He’s already transitioned his political action committee, Organizing for Action, to enable and mobilize his gaggle of community organizers at his beck and call.

We shouldn’t be surprised that the self-perceived transcendent 44th President would be less than honest in his last speech as president. After all, such mendacity and duplicity characterized his entire administration, from “if you like your plan, you can keep it,” to “I can’t change immigration law on my own,” nearly every major initiative of his administration has been laced with half-truths at best, and outright lies at worst.

The republic will stand a greater chance of survival with him out of office, but with so much damage done, the future is certainly more opaque. The nation certainly would be better off if this was indeed a real farewell!