The peaceful and orderly transition of power, or passing of the presidential torch, from one administration to the next has been a hallmark tradition of the American republic. However, this week there were many whose animus and disrespect for the President-Elect eclipsed their respect for our American traditions and institutions. By attempting to delegitimize the election of the 45th President and protesting during the inaugural festivities, they dishonor the republic and earn our contempt. While the protected right to engage in such dubious activities is as American as our First Amendment, the prevailing sentiment behind them is downright un-American. 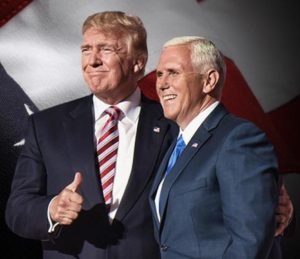 This week the nation witnessed the 45th peaceful transition of power in the 241st year of the republic. Each transition in our 228 year history has borne a unique historical context, has featured sometimes disparate players on the transitional stage, and have been at least somewhat blemished by discontented ne’er-do-wells. That couldn’t have been more true than for this week’s transition.

Democrats, still reeling from the stunning defeat of their anticipated successor to Barack Obama, are willfully, if not unintentionally, proving their detachment from reality by their public rejection of the new Commander In Chief. It’s as if they believe by attempting to delegitimize the election, protesting the inauguration, or promising to move to Canada, they can call a mulligan on the legal and successful election of Donald J. Trump as President.

And yes, it was legal and successful, in spite of all the whining to the contrary. We are not a “democracy,” where the mob rules, so the popular vote total for the nation is inconsequential, vis-à-vis the electoral college votes by state which is how our president is chosen. As a republic comprised of 50 individual states, the president is selected by the states, not by the aggregate popular vote total. 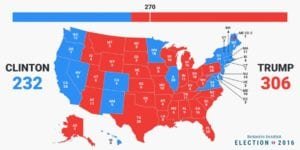 University of Idaho professor David Adler typifies a similarly bias-laced mentality when he bemoans, “We will have the silver medalist sitting in the White House.” Certainly someone claiming historical or even constitutional expertise should know that, according to Article II, Section 1, Clause 3 and the 12th Amendment, Donald J. Trump was clearly the winner, gold medalist if you will, from the November election. What matters is the electoral total, Trump’s 306 to Clinton’s 232 vote total. The fact that uber-liberal California provided Clinton with the nearly 3 million popular vote advantage is meaningless, for they still only count for 55 electoral votes. That is, it’s meaningless unless Clinton was running to be president of California.

And frankly, we all know that if the results were the other way around, no one from the left would be wailing about the popular vote advantage. Typical of their whining and supercilious mentality, everything’s fine when things work out the way they want. But when it doesn’t, the system’s broken, antiquated, obsolete, or anachronistic. They just wish they could change the rules, ex post facto. When they don’t get their way, they demand a mulligan. How fitting that one of the songs played at the Inaugural Concert Thursday was the Rolling Stone’s, “You Can’t Always Get What You Want.”

Eight years ago, President-Elect Barack Obama gloated, “Elections have consequences.” He was exactly right, and we’ll be paying for the consequences of his two elections as president for many years. But I don’t recall Republicans and self-avowed conservatives boycotting, demonstrating, and protesting either of his two swearing in ceremonies. 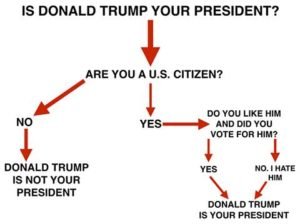 When the paid (or even unpaid) protestors attempt to disrupt the peaceful transition of power, they disrespect America. When Democrat congressmen boycott the peaceful transition of power, they demean their own office, and elevate political symbolism over the good of the country. When fellow Americans exclaim, “He’s not my president,” they’re either announcing they’re not really Americans, or they’re suffering detachment from reality, a mental disorder. Because if they are American citizens, whether they like it or not, he is their president.

When students and the administration at all-black Talladega College, are denounced for their marching band participating in the inaugural parade, the naysayers are maligning America, her traditions, and institutions. And when choir members refuse to sing with their choir at inaugural ceremonies, they’re simply proving how petty and un-American they are.

When the Girl Scouts invited to march in the Inaugural Parade, and their families, are viciously denounced and derided for participating in the peaceful transition of power, it’s only the critics that appear petty, imbecilic, and rude. Anyone with a semblance of normalcy and class would rejoice at their inclusion in the festivities. 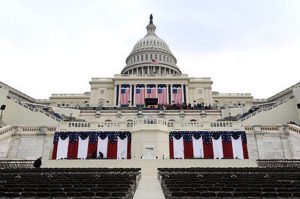 We have little individual control over exogenous events like election outcomes, or their concomitant inaugurations and swearing in ceremonies. The only thing we have complete individual control over is our response or reaction. We can choose to respond with class, composure, and dignity, or we can choose to make fools of ourselves, as many did this week. How we respond says much more about ourselves than it does the object of our scorn or approbation.

Even the divisive and detached-from-reality Minority Leader in the House, Nancy Pelosi, said after the election, “The peaceful transfer of power is the cornerstone of our democracy.” It’s actually the cornerstone of our republic, but the gist is the same. It’s too bad that so many of her fellow ideologues don’t see it the same way.

The American Presidential Inauguration lacks the pageantry of a monarchical coronation, but it’s symbolism and activities are steeped in American tradition. And there is no tradition more significant for the republic than the peaceful transition from one national leader to the next. As such, it’s an event worthy of celebration and our respect, regardless of political affiliation or ideological alignment.

Support Conservative Daily News with a small donation via Paypal or credit card that will go towards supporting the news and commentary you've come to appreciate.
Tags
Peaceful Transfer of Power