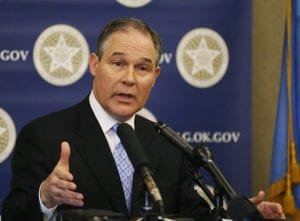 Pruitt is an outspoken critic of the EPA’s economy-crushing regulations, many that came from Obama’s “phone” and “pen” instead of from Congress.

Pruitt is well-aligned with conservative causes as during his tenure as Oklahoma Attorney General he championed pro-life cases, supported the Supreme Court’s Hobby Lobby decision, and took on the EPA in court.

Because President Obama was short-sighted enough to use executive memos and actions to progress his anti-business agenda, it will only take a new administration to undo them.

Trump is making inroads with Democrats in Congress by offering regular meetings with his Vice President Mike Pence which could help him put the kinds of reforms Americans want into law, instead of enacting them by the much weaker method of using executive actions like those taken by Obama.

Support Conservative Daily News with a small donation via Paypal or credit card that will go towards supporting the news and commentary you've come to appreciate.
Tags
EPA Scott Pruitt Trump Administration