Colin Rand Kaepernick is nothing more than a piece of crap in my book; I have no use for anyone who disrespects our flag and our country. Back in the late 1960’s and early 1970’s there was a term being used, I think we have to bring it back again. “America, love it or leave it.”

Just to show you what a moron this guy is, in a recent interview he said: “I said from the beginning I was against oppression, I was against the system of oppression,” Yet he idolizes Fidel Castro, one of the biggest oppressors of our time. This from a man who has reaped so many of the rewards that this country has to offer, he should be singing praises for this country, not degrading it.

His love for Castro and Cuba did not sit well with the Cuban people when he played in Miami. Cuban-American Miami Dolphins linebacker Kiko Alonso made his dislike for San Francisco 49ers quarterback Colin Kaepernick clear as a bell. In what may be seen as poetic justice, Alonso made the game-winning play for the Dolphins Sunday when he tackled Kaepernick just a few yards before he was able to run into the end zone to score a go-ahead touchdown. For Alonso, that play was personal.

After the game, Alonso told the Herald that he did try to hit Kaepernick hard, aware of the positive comments he made about Castro. He said. “Usually, I just try to play my game. But I did try to hit him.” Alonso tweeted after the game, which in Spanish translates to “come on, pussy.” Good for you Alonso. I think the people who lived in Cuba and fled to this country know what Castro was really like. Maybe this guy should move to Cuba a couple of months, and when he begs to comeback, we just say, sorry!

In my book him and people like him will always be losers, why the jerk doesn’t even vote. In this country we have the power of the ballot box, if he wants to make himself a victim all his life, then he will truly be a loser all his life. 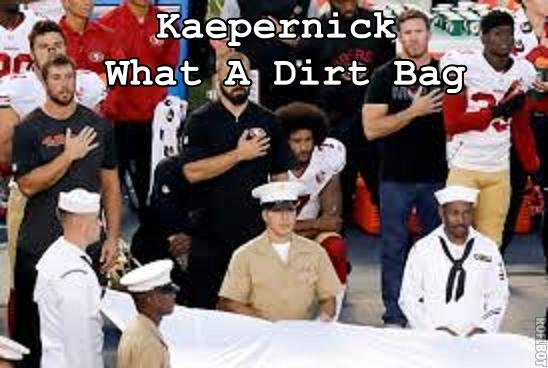