As if Christian pastors weren’t already busy enough this time of year, now there’s a new addition to the To–Do list that may take priority over the fight between Hymn singers and praise music listeners. Readers who worship the New York Times or only attend Christmas services may not be aware there is a schism regarding music in many congregations, or that there are even different types of worship music.

Hymn supporters prefer singing from a hymnal where the music is visible and the lyrics indicate pauses and the like. Hymnists also like the fact they are singing music, particularly at Christmas, that connects them with hundreds of years of Christian tradition. 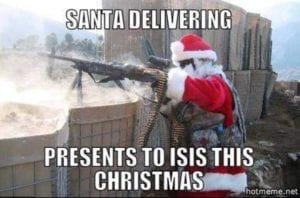 Praise music observers are different. A friend calls them Karaoke Christians because there are no hymnals. Instead the lyrics are projected using PowerPoint and a screen. Often this type of worship music is disparagingly referred to by people like me as “7/11” songs: The same seven words repeated eleven times.

Be that as it may, parishioners will only tolerate a service that lasts about 60 minutes. Particularly on Christmas Eve, there are often multiple services that have to fit in a limited number of hours. These time constraints result in discussions concerning what type of music and how many tunes that can become spirited, to say nothing of unbiblical.

Just when the pastor began to feel like he was caught between Shiites and Sunnis, there comes a new complication that strikes an even more discordant note than the music wars.

Breitbart reports ISIS “has published a list containing the names and addresses of thousands of churches in the United States, Canada, France, and the Netherlands, encouraging followers to attack them during the Christmas and New Year’s holiday season.”

This comes as a shock to many TV–watching pastors who assumed the imam’s new kneepads in the Amazon commercial would pacify Moslems for the next few weeks. That’s a mistaken assumption.

The list was posted on “Secrets of Jihadis,” which is located on a secure messaging site called Telegram. This board is Heloise for the homicidal. It contains helpful hints on bomb–making, decapitation, easy no–bake date recipes and how to host a massacre.

For some reason the US news media believes it has fulfilled it’s responsibility to the public by announcing the list, without bothering to publish which churches are on the list. That’s a crucial oversight.

Ignorance might be bliss for a Unitarian, uh, do they even call them pastors? Maybe it’s emcee. Anyway, since they don’t believe in the divinity of Christ, the virgin birth, shepherds tending their flocks or the Angel Alert Broadcasting network his church is likely to be so empty an exploding bomb or semi coming through the front door will only be a problem for the building inspector.

Episcopalians and Methodists may think their tolerance, inclusion and heresy will protect them from those mysterious exploding Moslems who lack any motive discernable by the FBI — but I have my doubts.

Jihadis aren’t noted for their attention to the nuances of Christian theology. Much like the Klan viewed race relations, one unbeliever is pretty much the same as another unbeliever to a jihadi with a detonator.

Baptists and Catholics can’t be so complacent. A former president of the Southern Baptist Convention memorably called Mohammed a “demon–possessed pedophile” and every crusader without exception was a Catholic. Meaning caution is in order for both denominations.

Services in my church are packed with people I haven’t seen since last Christmas. Mega churches are now mega–targets and winter weather certainly isn’t helping. There’s an old terror–community cartoon that has an Arab woman looking in a full–length mirror and asking her husband, “Does this bomb make me look fat?”

I personally own a coat that could hide 30 lbs. of C–4 or one bag of fertilizer without affecting the drape.

This puts the onus on churches to find out for themselves if their congregation is on the list and if it is, what preparations to make for volatile, uninvited guests.

Frankly as far as I’m concerned, pastors just can’t win. I’m surprised there is any joy in Christmas for the clergy this year. For them the only situation worse than being on the list, is being so insignificant your church was left off the list.