A North Carolina state representative is reportedly getting slammed for having emailed an internet meme with the fake newspaper headline “Trump forces black family from home.”

N.C. Rep. George Cleveland emailed the image to members of the N.C. House Republican caucus but included no comments of his own.

Cleveland’s peers wasted no time disparaging their comrade as they felt the republicans need to be very careful in their words and actions.

“I am not sure what point George is trying to make with the email below but it is certainly in poor taste,” House Rules Chairman David Lewis of Dunn wrote. “There are forces at work following this election that I do not understand – forces of hate and intolerance. I condemn those forces. I condemn the KKK and Black Panthers and any other group hell bent on dividing us. We must be smart enough to know our words and actions matter.”

Rep. Bob Steinburg of Edenton responded to Lewis: “Amen David, Amen!! We need NONE of this even in a poor and in my view tasteless attempt at humor. We are better than that.”

Well, that’s good to know, they condemn the KKK – alert the media…

If politicians gathered nothing else from the 2016 campaign, it should have been that perhaps all the soft-worded, over-parsed, heavily polled talking points got absolutely run over by speaking plainly. Did they seriously not at least chuckle when they saw this: 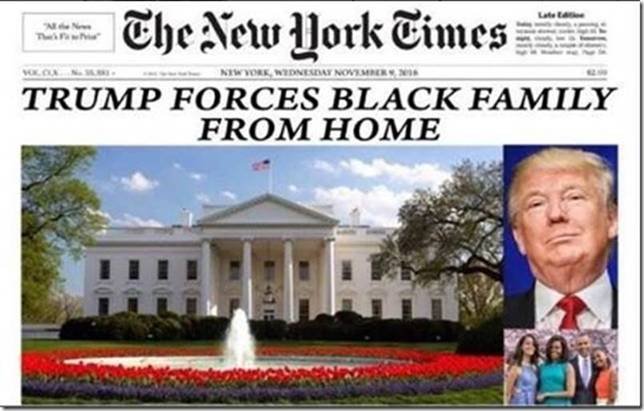 The fake NYT front page is an excellent bit of satire. When I first saw the subject line in my inbox “Trump Forces Black Family from Home,” I thought a reader was sharing a real story where the mainstream media was “reporting that Trump had allegedly used imminent domain to displace a poor black family. I could imagine a myriad of weak accusations from anonymous sources all making the front page of the heavily-biased New York Times – then I clicked on it .,. and laughed.

The single headline says so much with very few words. It speaks to the biased media, identity politics, the 2016 campaign, the new outrage society and so much more although I am sure many found trigger words, racism and the end of society as we know it in that story title.

This over-sensitivity to everything is what has universities canceling mid-terms, holding sit-ins, erecting play-doh and teddy bear stuffed safe spaces and making counselors available to comfort students who are having a difficult time dealing with their emotions after Donald Trump won the election. It’s hard to imagine how those precious little buttercups are going  to react the first time their boss disagrees with some aspect of their performance at work. Then again, perhaps we’ve finally figured out why so many of them are living at home.

Not all of Rep. Cleveland’s fellow house members went along with the P.C. policing effort:

“We need to set up a ‘safe space’ for our people to go to after ‘micro-aggressions,’” Rep. John Blust of Greensboro wrote. “I see where N.C. State has done this in wake of the election for its students. They are even having grief councilors and granola bars. One can’t help but wonder if such students should be home with their parents.

So, did the North Carolina house member really go too far or have some republicans bought into the overly-sensitive safe-space culture?

Support Conservative Daily News with a small donation via Paypal or credit card that will go towards supporting the news and commentary you've come to appreciate.
Tags
2016 Presidential Election George Cleveland North Carolina