Hillary supporters in metropolitan areas continue violent protests for a second night in the oddest display of infantile displeasure … ever –  but why?

Why didn't protesters take to the streets when Hillary/DNC/Donna Brazile/media cheated Bernie Sanders out of the nomination? #TrumpProtest

First, we go to Philadelphia, the city that was supposed to turn out its massive, liberal-aligned, inner-city population to deliver an otherwise red state to the Democrats. Are they expressing anger at their own failure to get off their butts and vote? Nope, not when “Philly hates Trump” is so much more fun… or something.

#PhillyHatesTrump (in case you were curious as to the protesters' feelings on President-elect Trump) pic.twitter.com/4B1PoUKSE6

In Portland, Oregon things got a bit rough:

Group is leveling the pearl. I'm in shock. #TrumpRiot pic.twitter.com/smLgvEoRQ5

Due to extensive criminal and dangerous behavior, protest is now considered a riot. Crowd has been advised.

Someone cracked a driver's windshield while she was trying to drive thru. She said someone was in an emergency. pic.twitter.com/B5BfzXbXK4

Just waiting for the teachable moment speech from our current President .. any minute .. really… 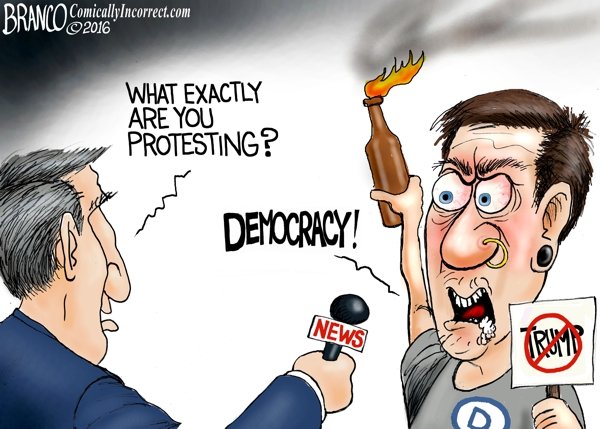 In Oakland, California, their calling for a “revolution” without a cause – unless their revolting against free and fair elections…

In Minneapolis, democrats are standing in the middle of an interstate which symbolizes … um… well .. nope, can’t come up with a single thing – but it’s symbolic somehow.

The Dallas “protest” seems to have a bit less energy than the others:

#Right now #antitrumprally about to get underway in #Dallas. Protestors: the election is over. Fight starting @CBSDFW pic.twitter.com/eTOuh5s9Xw

In a truly epic fail, Vancouver protesters came out to join the other Hillary defeat parades – someone should remind them that British Columbia… yeah, not in the United States.

#BREAKING Trump protesters are marching down W. Georgia St, blocking traffic. This is the view from Chopper 9. pic.twitter.com/bOKMutfoK4

President-elect Donald Trump tweeted that professional protesters were being egged on by the media:

Just had a very open and successful presidential election. Now professional protesters, incited by the media, are protesting. Very unfair!

Someone has to tell them that there is no way for Hillary to win – mainly because Trump has a lot more than the 270 electoral votes needed to win, but also because Hillary conceded the race.

So… what is the best way to tell a generation of young people – who have been told that there are no losers and that everyone gets a trophy – that it’s over and they should go home?

Ah, yes, Hillary and Obama demonstrated exactly how to connect with progressives when they brought out Madona, Jay-Z, Katy Perry, and Lady Gaga to push the democratic candidate. A celebrity seems the best way to pass along vital information to democrats in a presidential election .. so here goes:

Support Conservative Daily News with a small donation via Paypal or credit card that will go towards supporting the news and commentary you've come to appreciate.
Tags
California Hillary Clinton Minneapolis Oakland Protests