The abject bigotry on public display across our fair land since the election should be alarming to all sentient and cognitively functional Americans. The level of hatred directed not just toward President-Elect Trump, but against his supporters or even those who merely voted for him, has been elevated to little less than an ideological pogrom born of hate and bigotry against those who may be different. What they obviously fail to realize is that they’re perpetrating something they so vehemently denounce against others who may be a little different – hate crimes. 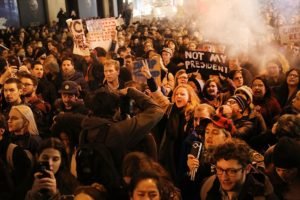 Those who have taken to the streets to protest the election results, and loot and riot, and assault others, are ironically of the same ideological alignment as those who feigned such disapprobation at Donald Trump’s assertions that the elections were rigged, and that he may or may not accept their results. Now that the shoe is on the other foot, the results of an apparently clean election are being protested by these leftists, throwing what amounts to be prepubescent tantrums over the results. It’s probably safe to say that these poor souls have had their “safe spaces” violated. And thanks to MoveOn.org’s (George Soros’ organization) backing, the protests are well funded and orchestrated.

Perhaps the best way to understand the hate crimes being perpetrated is to revisit the antipathy that begets them. For the emotions and biases behind hate crimes born of bigotry are no different than those born of racism. And by “racism,” I mean what it really is, not based on what so many social justice whiners truculently allege or assume is “racism.”

Racism is, definitionally, “prejudice, discrimination, or antagonism directed against someone of a different race based on the believe that one’s own race is superior.” Bigotry is “intolerance toward those who hold different opinions from oneself.”

As one sociologist has explained, “The main difference between a racist and a bigot is the fact that racism discriminates on the basis of race, whereas a bigot discriminates on the basis of his personal opinion, which can include race, gender, religion or beliefs produced by their own personal life experiences. Hence, it can be said that racism is a particular subset of bigotry.” Deductively then, a racist is no different than a bigot; discriminating and attacking someone because they’re “different.” 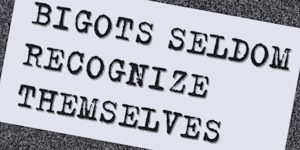 Regrettably, most bigots don’t even know that’s what they are. They are so preoccupied with their prejudices that they begin to treat other people with hatred, contempt, intolerance, fear, or distrust. This intolerance and persecution can be based on a person’s political views, religion, ethnicity, gender, sexual orientation, disability, socioeconomic status, or other characteristics. Today, it obviously is deemed to be chic or en vogue to be a bigot, as long as it’s directed toward a “Trumpster.”

“Hate crimes” are bias-motivated, or prejudice-motivated crimes, occurring when a perpetrator targets a victim because of his or her membership (or perceived membership) in a certain social group. In leftist circles, they are incorrectly assumed to be only perpetrated by sexists, homophobes, Islamophobes, or misogynists, whom they presume to be “right-wingers.” In reality, they are perpetrated by bigots with immense antipathy and a dearth of tolerance toward any group, and amongst those who claim to be so “tolerant,” the most common target today happens to be Trump voters. 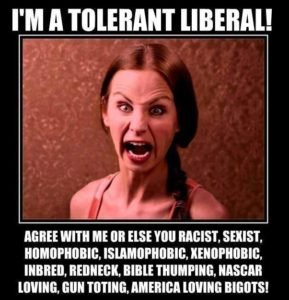 No hate crime is condonable! Violence against people who act or look differently is an affront to our humanity. And no less so for those who believe differently, whether based on their religion or their politics. Bigotry is both the stimulus and the unwarranted justification for a hate crime, and regardless of the target, it is absolutely abhorrent!

The post-election protests are fully within our First Amendment rights of free speech. That’s a given. But there’s no concomitant “right” to riot, destroy property, and hurt people. That’s violence, and in the emotional post-election context, they constitute hate crimes born of bigotry.

The mainstream media has made hay with even the slightest unverified allegation of impropriety toward those perceived, erroneously, to be “targets” of anticipated Trump policies. But they’ve been remarkably reticent on the hate crimes perpetrated against Trump voters or supporters. The duplicity and hypocrisy does not come as a surprise.

Considering the apparently orchestrated media blackout, here are just a few examples of what’s been occurring. A man wearing a “Make America Great Again” was choked, beaten, and pinned on a subway train in New York. In Rockville, MD, a 15 year-old Trump supporter was beaten, thrown to the ground, and kicked in the ribs. He also was wearing a MAGA hat.

In Germantown, PA, a diner in a restaurant attacked a woman wearing a Trump T-shirt. A man in Chicago was beaten and kicked to the ground while the crowd around the thugs, chanted, “Don’t vote Trump!” Felony aggravated assault charges have been filed against six members of an Austin, TX communist group for their attacks on Trump supporters. A Trump detractor shot a 60 year-old man for his pro-Trump vote. 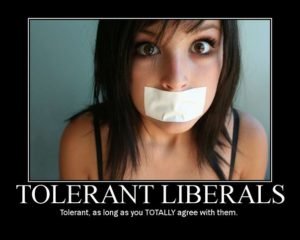 The “bastions” of tolerance, today’s college campuses, have been among the worst, as campus protests turned ugly and oftentimes violent, even before the election last week. One student explains, “You face crazy leftist mobs that are not tolerant of your views whatsoever, and it turns into a lot of bad debates. Sometimes violent, sometimes hitting and fights. I’ve been all around it. I am treated very poorly on my campus. It’s very hard to be a conservative activist in Los Angeles.”

The left is continually and vociferously denouncing hate crimes and purported bigotry against minority groups, yet for some reason feel no compunction for their own bigotry and hate crimes against those who may think differently. It’s time for the duplicity to stop. As Trump said in his 60 Minutes interview last week, “Just stop it!” And that goes for both sides, not just one. It’s time for those who so ardently profess their own level of “tolerance” to actually prove that they have some. Tolerance is not just for people to look or act differently, but for those who think differently as well.

Support Conservative Daily News with a small donation via Paypal or credit card that will go towards supporting the news and commentary you've come to appreciate.
Tags
intolerance Intolerant leftists Politics tolerance