As I settled in for the Vice-Presidential debate, I really didn’t know what to expect, after all I didn’t know much about either contender, especially Kaine. What I was not expecting was Tim Kaine making a complete ass of himself. After a while I found myself sitting there shouting at the TV, “Will you shut the hell up and let the man speak.”

I eventually got to the point where I was very agitated and if I was moderating the debate I would have gotten up and slapped Tim Kaine and tell him to shut-up and give Mike Pence a chance to talk. It was obvious that Kaine was scripted and given orders to do and say what he did, but it didn’t work. Though the debate was expected to be dull, people on Twitter noted that Kaine looked “unhinged” and seemed “out of control.”

“If he had just waited his turn,” MSNBC host Chris Matthews lamented after last night’s vice-presidential debate, Tim Kaine “would have had his opportunity” to make his points. “I don’t know why he kept interrupting,” Matthews continued. “With two people debating, the other guy gets the chance to speak.” This is from a guy who feels a thrill up his leg when ever Obama speaks. There is no proof, but it is said that Chris Matthews also has a shrine of Obama that he prays to every night.

Nearly everyone had the same impression as Chris Matthews, which was that the constant interruptions in a two-person debate looked a little desperate, especially for the purpose of reading from a scripted set of soundbites while Pence calmly discussed policy.

I have to admit that Hillary and Kaine are perfect for each other, they are both annoying, although Hillary edges out kaine in that category. If Trump can pull off a winning debate on Sunday, he can make another comeback. The question is will he be able to keep it, he will if he stays off Twitter at 3 O’clock in the morning. Trump had better take a few lessons from his running mate and prepare to look and sound more presidential the next time out if he wants to get any advantage from Pence’s performance. 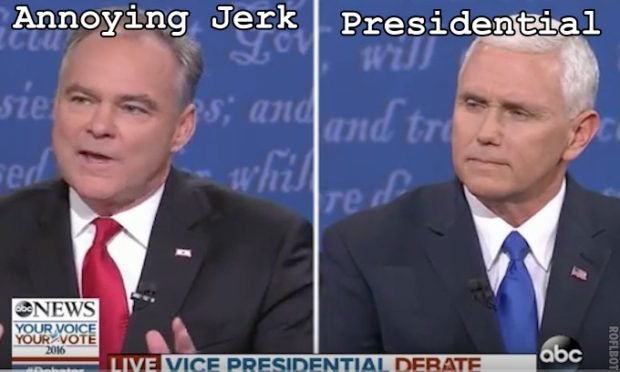 Support Conservative Daily News with a small donation via Paypal or credit card that will go towards supporting the news and commentary you've come to appreciate.
Tags
How Annoying Was Tim Kaine Politics