Politics may not be of interest to you, but politics sure has an interest in you. Whether you feel it doesn’t make a difference by having your voice heard, or you just don’t care what government does to you or demands of you, the political process is heavily dependent upon you. And frankly, it often succeeds due to failure on our part to be involved. 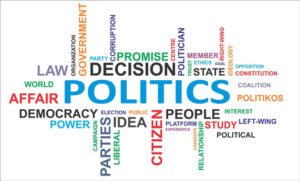 Politics, after all, is simply “the activities associated with the governance of a country or other area, especially the debate or conflict among individuals or parties having or hoping to achieve power.” It is the exchange of ideas for governance that occurs in a free society.

There is a more pejorative, or less desirable aspect of the political process that is often laced with conflict over those who seek positions of responsibility that is often a “turn off” to many. This is understandable. But it’s simply part of the process, and arguably the biggest part, that determines the ideas and principles employed to determine the future of a community, a state, or a nation. One can be involved in the exchange of ideas, and sharing or supporting principles or even politicians, and still not be embroiled in the corruption that often defiles the process. 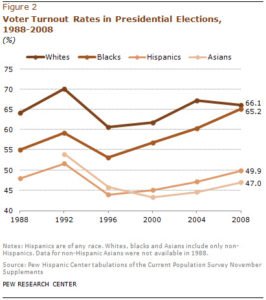 But isn’t that how life is in general? To all good and important things, there are less desirable antecedents, or concomitant events or actions. The pain and discomfort of childbirth is followed by the joys of parenting and delightful children. The prolonged dedication to jobs and work produce the comforts of life we aspire to for our families. The temporal loss of a loved one accompanies a greater appreciation for life and the impact of the one on our lives. As one good book says, “there is an opposition in all things.” There’s the good with the bad, the joys with the pain, and the light with the dark. In short, there’s the satisfaction of articulating correct principles, which is sometimes accompanied by social conflict over those ideas.

Surprisingly, usually only 50-60% of eligible voters in the country vote for their president. In midterm election cycles, between presidential elections, eligible voter turnout drops to as low as 38%, as with the 2008 midterms, even though they are arguably even more important perhaps than the presidential elections. And with each election cycle, every two years, local and state officials are vying for votes to give them the keys of governance. And since local government has a much more significant impact on our immediate quality of life, every election, even strictly local ones, are much more effectual for each of us personally.

There’s a video circulating on the internet that uses pennies to illustrate how many fellow citizens voted in the presidential primaries this year to provide us the two major candidates for president. It starts with 324 pennies, each representing a million people. Subtract 103 pennies from those, which represents the 103 million who are ineligible to vote, like children, non-citizens, and felons. Then subtract another 88 million who never vote, not even in general elections. Then delete another 73 pennies representing those who didn’t vote in the primary elections, but will likely vote in the general election. That brings us down to 60 pennies, representing those who voted in the primary elections, about 30 for each of the two major parties. Half of those primary voters cast their ballots for someone other than the two nominees. Statistically, just 14% of eligible voters, or 9% of the entire population, voted for Trump or Clinton. Fully 161 million eligible voters did not vote for either candidate. 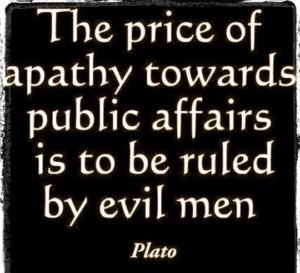 Now, in light of this data, consider how much different the outcome could have been if even a percentage of the 88 million who never vote, had done so, or a portion of the 73 million who were eligible, yet failed to vote in the primary election. If you are dissatisfied with the two nominees, yet failed to vote, you are part of the reason why out of 324 million people, we are left with two significantly flawed candidates.

Elected officials, and politics in general, determine a great deal about your life, or can have significant impact on your quality of life. They can impact how dynamic the economy is, which effects what kind of job you may have, or how much you can earn, or how much of your hard-earned money you get to keep. They will have an impact on what government demands of you, what kinds of healthcare you get, the kinds of products that are available to purchase, and the quality of our food and environment. They have an impact on our social environment, the respect or lack thereof for the law, and the quality of our educational system for our children and grandchildren. 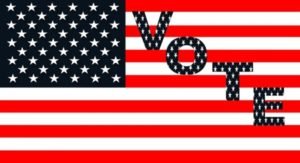 In short, there is very little they don’t have an impact on. And their success in implementing their ideas is directly effected by the involvement of the American citizen. We are, after all, a republic, founded on the principle that we are bestowed with inalienable rights of life, liberty, and the pursuit of happiness. Are we forfeiting our rights by not participating in the process that determines our ability to retain, protect, and maintain them?

Thomas Jefferson stated, “There is a debt of service due from every man to his country, proportioned to the bounties which nature and fortune have measured to him.” To some, that debt of service may be to serve in an elected capacity. To some, to fairly and accurately report the facts of what is occurring in our nation and our communities. And for others, it is to merely work hard for our families and pay our taxes. But for all of us, without exception, the debt of service must include participation in the electoral process of choosing our leaders and representatives. Any less than this, as eligible voters, is a forfeiture of our rights as citizens to ensure our pursuit of happiness, and perpetuation of our republic. 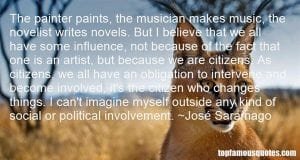 For as the Nobel Prize-winning author José Saramago has said, “The painter paints, the musician makes music, the novelist writes novels. But I believe that we all have some influence, not because of the fact that one is an artist, but because we are citizens. As citizens, we all have an obligation to intervene and become involved, it’s the citizen who changes things.”

None of us can do everything, but all of us can do something. And the very least we can all do, is to be informed and to vote. In fact, our citizenship demands it of us!

Support Conservative Daily News with a small donation via Paypal or credit card that will go towards supporting the news and commentary you've come to appreciate.
Tags
2016 Election News Citizenship Politics voting