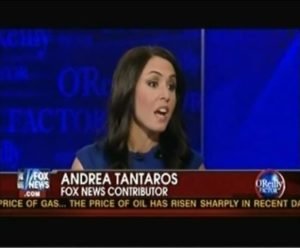 Tantaros alleges that Aile’s frequently called her into his office and ask her to “turn around” so he “could get a good look” at her. The suit also claims that Ailes’ successor, Bill Shine, issued threats of retaliation unless she dropped her complaints about Ailes’ behavior.

Andrea hasn’t been seen on fox for several months. The network accused her of breach of contract for writing a book without network approval and took her off the air.

In arbitration hearings on the book dispute, A Fox attorney has claimed that her claims of sexual harassment were an attempt to gain leverage.

A Fox spokesperson declined to comment on Tantaros’s suit, saying only that Fox does not comment on pending litigation.